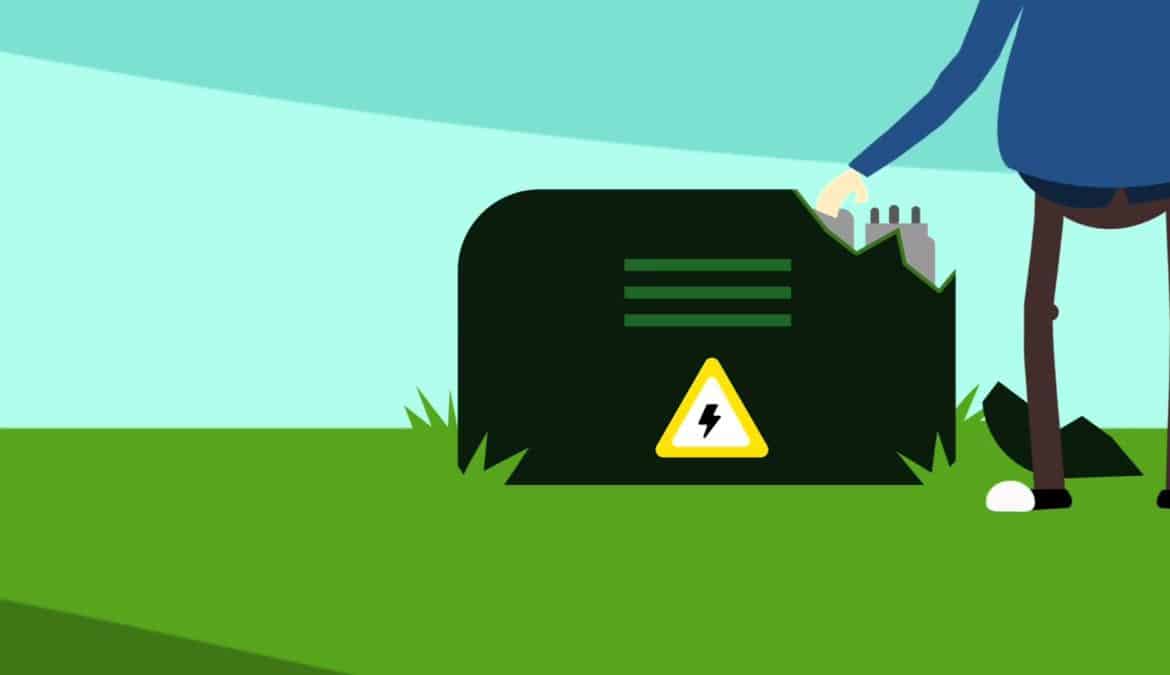 That “big green box” in your yard needs space

Transformers change voltage from higher levels to voltages people use in their homes for their electronics, appliances and lighting.

While overhead power lines are mounted on utility poles and substations are protected by security fences, pad-mounted equipment is at ground level.

Clarence Greene, Safety and Loss Prevention director with Kentucky Association of Electric Cooperatives, says, “If you see kids playing near pad-mounted transformers, ask them to move elsewhere, away from the electrical equipment.”

In many newer subdivisions and residential developments, overhead lines are no longer installed above ground. While consumers seldom see technicians working on the underground equipment, they are regularly inspected by co-op crews.

“It’s also important that landscaping and other barriers be kept clear of co-op equipment,” says Greene. “Co-op technicians need at least 10 feet of clearance at the opening side of a pad-mounted transformer. Approximately 4 feet of open space is preferable at the rear and on the sides of the metal housing.”

It’s important to check with your local electric co-op before planting shrubs or trees, setting fence posts, installing sprinkler systems and digging where it might damage underground lines. 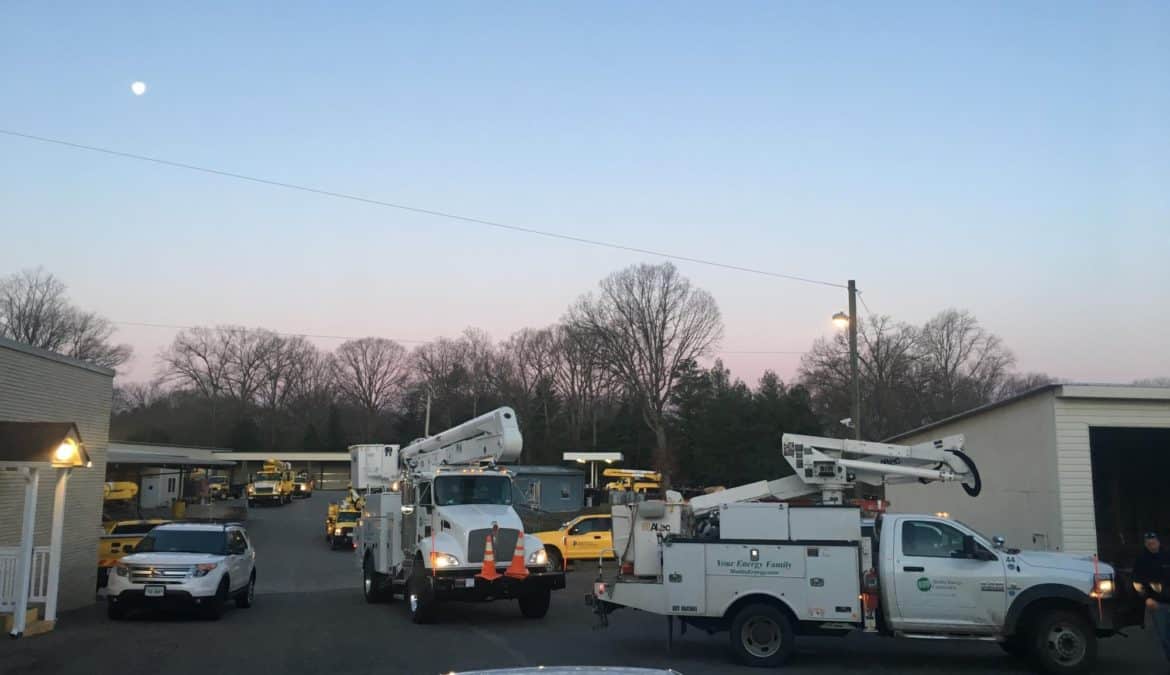 Mike Mason’s day as a lineworkerfor Shelby Energy Cooperative actually started the night before. He was getting ready for bed when a woman reported her power out. It was Mason’s turn to be on call overnight for the Shelbyville-based utility. He drove to the woman’s house, identified a problem in the base of the meter, installed a temporary fix until an electrician could get out the next day and returned home two hours later. He reported to the co-op office at 7:30 the next morning.

“I like hunting down problems,” says Mason. “I know I’m doing something the members can’t do themselves. They depend on us.”

I meet Mason and his co-workers to write this story about a day in the life of a lineworker. I discover a group of people who carefully follow the rules of an elaborate system that lets the rest of us make magic by flipping a switch. It’s a system of little pieces of hardware, big trucks and a warehouse full of tools.

While every day is different, the same is true of the 713 lineworkers who work for Kentucky’s 26 electric co-ops providing power to more than 1.5 million co-op members.

Lineworkers are quick to credit other jobs at the utility—accountants who process their paychecks or the member services reps who talk to unhappy callers with power outages.

Still, we’re all fascinated by this unique profession involving high voltages and climbing poles in the snow and cold. That’s often what the lineworkers like best about the job.

“I like being outside and not at a desk all day. I get to meet a lot of different people,” Benji Bohannon says. “I like being at the top of a 40-foot pole and watching the sun come up over a beautiful countryside. A lot of people don’t get to see that.”

Today, Mason starts his day in a room with the rest of the lineworkers, each planning their day around stacks of paper—checklists, maps and work orders.

In addition to coordinating plans, these guys (there are a few women among the more than 15,000 co-op lineworkers around the country) need to keep track of a lot of equipment. They need to be wearing safety gear or have it close at hand—hard hat, safety glasses, fire-retardant uniforms, steel-toed shoes, regular work gloves, hot-line safety gloves.

But before driving to their jobs, they turn their attention to the weekly safety meeting.

Safety coordinator Sarah Newton announces that while catastrophic contact with electric current is always a top concern, today’s meeting would focus on “slips, trips and falls that can cause very big issues.”

They then hear from Tony Dempsey, a member of the statewide safety team at the Kentucky Association of Electric Cooperatives.

“Working on electric lines isn’t dangerous,” says Dempsey, seeming to contradict every other safety message. But then he makes his point: “It’s unforgiving and it’s hazardous, but accidents don’t have to be a part of our work. We have the tools, we have the rules, the employees and the knowledge that can keep it from being dangerous.”

That safety emphasis seems to be working. From 2006 to 2015, co-op lineworkers across the country reported 53 injuries from falls, including falling off poles. In 2016, that number was zero.

By midmorning, the convoys are ready. I follow three lineworkers driving three trucks: a service truck, a bucket truck pulling a trailer with a large spool of wire, and a digger truck with a huge auger on top and pulling a trailer with a backhoe. They head across the county to relocate a ground-mounted transformer, moving it 500 feet uphill, near an underground connection at a new barn.

“It’s going to be muddy out there after the rain we’ve had,” says Rick Shaw, the crew leader who is a revered lineman among co-workers, with 41 years’ experience at Shelby Energy. “When you’re working on underground connections, mud is not your friend.”

At the driveway into the worksite the crew faces the first of several time-consuming obstacles: managing a right turn without ripping out the mailbox. They drive to where they can turn around, allowing a left turn onto the property.

The trucks ease up the crushed-rock driveway, avoiding the soft ground on either side. Once there, the crew members change into rubber boots.

The men gather for a routine job briefing. They open a metal-clad clipboard, reading through a stack of forms, noting the address, cross street and account number—should they have to report an accident, location info would be quickly available. All three sign the form.

They break their huddle and de-energize the lines they will be working on, and let the office know the power has been cut. For the next two hours, they use the backhoe to dig out the transformer and carry it up the hill for rewiring into its new location. When they finish, they pack up and top off the gas tanks on the way back to the office, where they check paperwork and equipment for the next day’s jobs.

Everything the lineworkers did that day seemed to take a long time.

When asked about it later, Jason Ginn, Shelby’s manager of Operations, says “We don’t think this is taking a long time. We just think, this is how you do it. We don’t say, ‘hurry up.’ We look out for each other.”

From the June 2018 issue of Kentucky Living 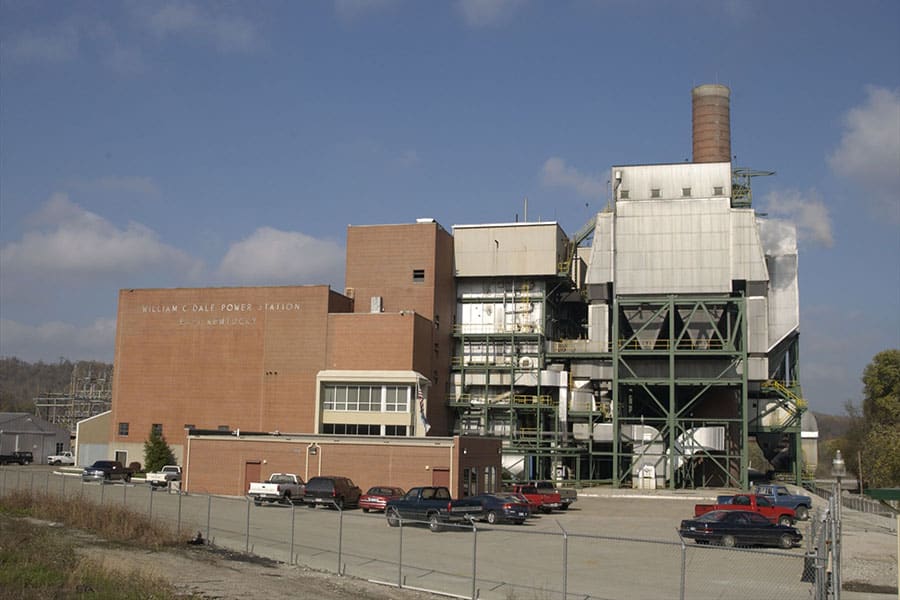 The powerhouse and stacks of Dale Station, located in southern Clark County on the Kentucky River, will be torn down and removed over the next year.

The plant ceased operations in early 2016. Since that time, the powerhouse, which houses the plant’s generating units, has been unused and is beginning to deteriorate.

“Maintaining the abandoned powerhouse is an ongoing cost to EKPC, and it is likely to increase as the structure deteriorates,” said Anthony “Tony” Campbell, EKPC’s President and Chief Executive Officer. “We have determined it is best to proceed with demolition.”

Once demolition is complete, the footprint of the powerhouse will be filled and leveled.

EKPCmaintains a switchyard and other transmission facilities at the site. They will continue to operate and are critical to the reliability of the regional power grid. In addition, an office building and some out-buildings will remain.

The powerhouse is in close proximity to surrounding homes and other private structures. EKPCwill take steps to share information with neighbors beforehand about plans for demolition, and will provide ongoing updates and notification about upcoming demolition events.  If necessary, EKPCwill make provisions to protect nearby structures.

“Dale Station was EKPC’s first power plant,” Campbell said. “Over the years, the plant served a vital role in providing reliable, affordable energy for thousands of homes and businesses and millions of Kentucky residents.”

Plans call for demolition activities to begin in July and last until July 2019. Security personnel will remain on site 24 hours a day. 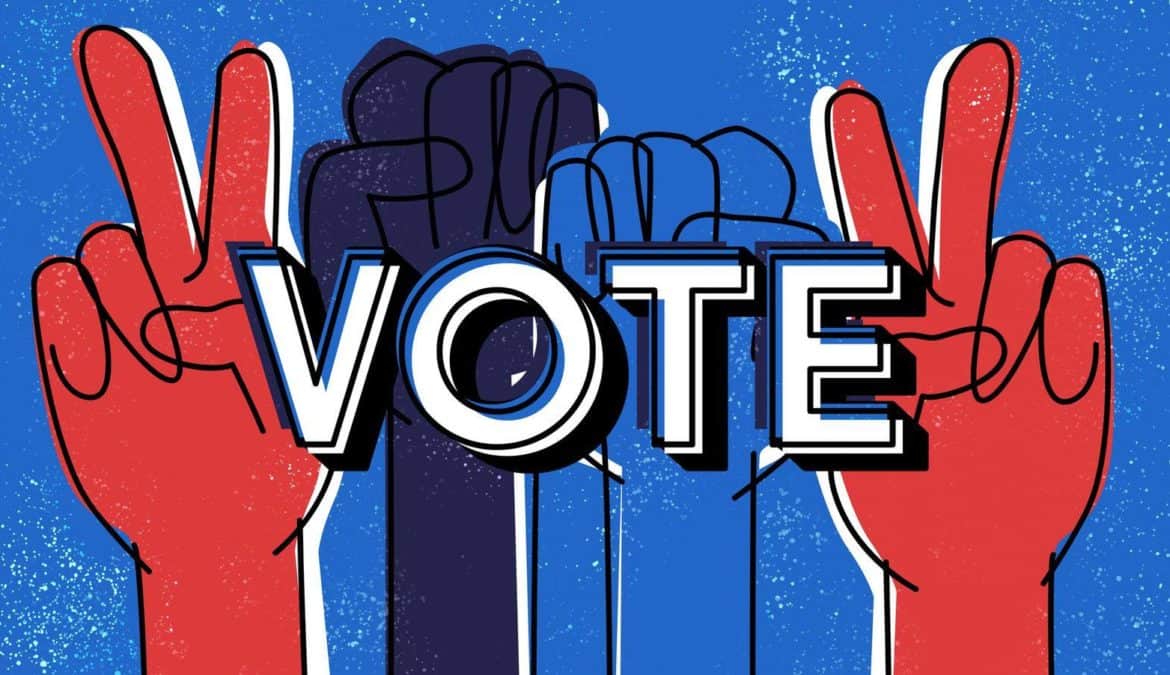 In 2016, rural America played a big part in our national elections – 500,000 MORE rural voters went to the polls than in 2012.  This is an incredible story, as many in small towns and communities across our country went to the polls to ensure their voices were heard, and elected officials took notice.  But, elections matter EVERY year.

2018 will be no different, and electric cooperatives have the opportunity to play a vital role in encouraging rural voter turnout and engaging on issues that matter most to us. This year, we must build on the momentum we started in 2016, to join with 42 million members of electric cooperatives around the country, and remind our elected officials that rural issues matter.

Electric co-ops are not-for-profit energy providers that are owned by the members they serve.  They provide coverage for 88 percent of our nation’s counties. They are a foundation in their communities and their members can make a difference in lending their voices to issues like rural infrastructure and broadband, and maintaining access to affordable, reliable electricity.

To ensure that all electric co-op members do continue the drumbeat that started in 2016, the National Rural Electric Cooperative Association (NRECA) will continue the successful Co-ops Vote program. This is a non-partisan initiative that remains quite simple at its core:  to ensure that members are registered to vote and they go to the polls for every election, and to ensure rural issues remain part of the national discussion.

By participating in the Co-ops Vote program in 2018, co-op members continue to send a resounding message that all candidates – at all levels – will need to put rural America’s concerns front and center in order to earn our vote. We proved in 2016 that with millions of electric co-op members speaking out with one voice, we can have a major impact in making our top issues part of the national conversation.