Champion of energy retiring after 22 years in Congress

Leaders of Kentucky’s electric cooperatives are thanking U.S. Rep. Ed Whitfield (Ky-01) for his decades of service in Congress, in particular his leadership on energy issues and commitment to affordable and reliable electricity in the United States.  On Tuesday, Whitfield announced that he would not seek a 12th term in the U.S. House of Representatives.

As Chairman of the House Energy and Power Subcommittee, Whitfield has been a tireless and consistent advocate for Americans most affected by federal regulation of U.S. power plants.  The Hopkinsville native played a key role in modernizing U.S. energy policy, while promoting clean uses of coal and protecting domestic uranium enrichment capabilities at the Paducah Gaseous Diffusion Plant.

Most recently, Whitfield has forcefully and articulately objected to pending EPA regulations projected to dramatically increase electricity rates for members of Kentucky’s electric cooperatives over the next 15 years.

“I hate to see him go,” said Greg Grissom, president and CEO of Pennyrile Electric in Hopkinsville.  “Congressman Whitfield has been a wonderful asset for the First District and a very strong supporter of our electric cooperatives.”

Grissom, a former executive at Hickman-Fulton Counties Rural Electric Cooperative Corporation, noted that Whitfield has worked to understand and represent the varying needs and concerns of individual electric cooperatives, regardless of the source of electric generation.

“Representative Whitfield has been a tremendous asset to the electric cooperative program in Kentucky and nationwide,” said David E. Smart, president and CEO of West Kentucky Rural Electric Cooperative Corporation in Mayfield.  “He is always accessible, knowledgeable on our issues and ready to work with us for the greater good of our members and his constituents. His experience and support of the first district will be difficult to replace.” 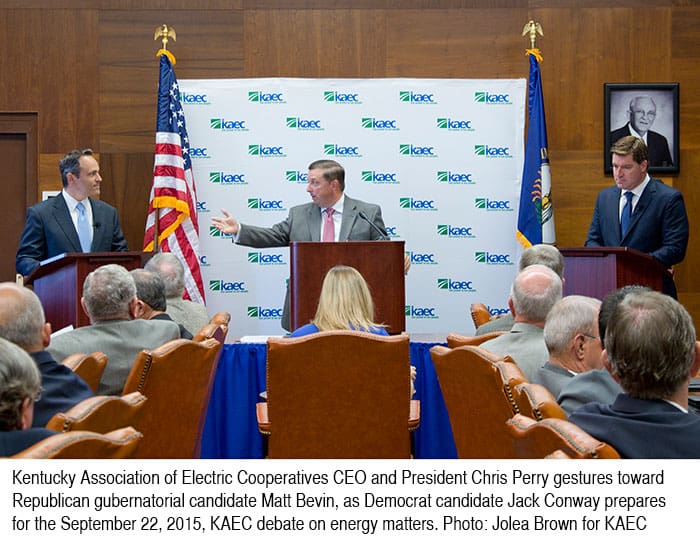 With Kentucky facing challenges and critical decisions relating to the future of energy use and generation, the Kentucky Association of Electric Cooperatives (KAEC) hosted a debate on September 22, 2015, with gubernatorial candidates Jack Conway (D) and Matt Bevin (R).

For one hour, the candidates answered questions on a variety of concerns to the 1.7 million Kentuckians served by KAEC member cooperatives.  The 52-member board, representing 26 local cooperatives across Kentucky, attended the debate, held at KAEC’s headquarters in Louisville.  Both candidates recognized the importance of Kentucky’s electric cooperatives in the lives of the people they serve, stressing the legacy of reliable and affordable electricity, especially in rural areas dealing with poor economic conditions.

“We are going to need to have steady and affordable energy sources both now and going forward,” Bevin said.  “This is imperative.”

“I worked closely with the rural electric cooperatives,” Conway said of his work on energy issues in the administration of Governor Paul Patton.  “I chaired a task force that told the entire state that going to a deregulation of the electricity industry made no sense for a low-cost state like Kentucky that uses its electric rates to create jobs. And I hope you feel that as Attorney General of Kentucky, I’ve looked out for the ratepayers and economic development in rural Kentucky.”

“Certainly, our utility costs have historically been a great demand for us,” Bevin added.  “If there is anything we could be great at, I mean truly a beacon for the rest of America, it would be as a manufacturing hub.”

The candidates also addressed questions on  business and workforce development, education, pensions, deregulation and how Kentucky will deal with the federal mandates in the Obama administration’s Clean Power Plan. The October issue of Kentucky Living, KAEC’s flagship statewide publication, will feature a comprehensive summary of the candidate’s remarks.

Perry said KAEC and its member cooperatives look forward to working with the next governor on the issues discussed at Tuesday’s debate.

Kentucky Association of Electric Cooperatives is the statewide association that provides services for the 24 local, consumer-owned electric distribution utilities in the state, as well as two generation and transmission cooperatives that produce power. Electric co-ops in Kentucky serve 843,000 member-owners, providing power to one-third of Kentucky’s population. KAEC services include representation before the Legislature, Congress, and regulatory bodies; safety training; coordination of management training; and public relations support including publication of Kentucky Living magazine, the largest circulation publication in the state with nearly 480,000 copies mailed monthly, with a readership of 1.2 million.