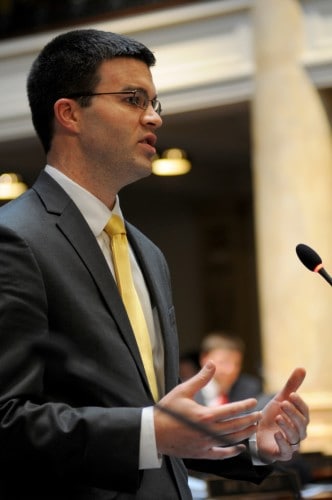 Intrigue over the balance of power in Kentucky’s House of Representatives took a back seat to actual legislation in the 2016 General Assembly’s first full week on the job.

That said, three dates are circled on everyone’s calendar in Frankfort:

April 12 – “Sine Die” – the date the General Assembly consumes its 60th and constitutionally mandated final day of the session.

Bevin’s speech will come on the legislature’s 15th day. In the mean time, lawmakers are moving ahead, especially with bills which were either resurrected from previous years, or piggyback on previous initiatives.

The first bill to clear either chamber is Senate Bill 11, which aims to modernize Kentucky’s 1930s-era alcohol laws.  Backed by the booming bourbon industry and craft beer makers, the bipartisan legislation sailed through the Senate by a 29-8 vote.

Bourbon tourism is at the heart of the comprehensive bill, which would increase the amount of packaged alcohol that can be sold at distilleries from three to nine liters. Sample sizes at distilleries would grow from 1 ounce to 1.5 ounces.

The bill, however, is not supported by all distilleries, including one in the Senate district of Sen. Joe Bowen of Owensboro.

“I’m very conflicted on this bill,” Bowen (R) said, while expressing support for alcohol-related business in Kentucky. “But at the end of the day, Mr. President, I simply feel that there are some inequities in this bill. There are some contradictions in this bill.”

Joking that his Senate district also includes homegrown distilleries which are not legal, Senate President Robert Stivers (R-Manchester) expressed hope that the booming bourbon businesses would spread the wealth in the distressed economy of Eastern Kentucky, where the coal industry has been decimated.

“We have one wonderful resource in the east that is not carbon related and that is timber, white oak,” Stivers said. “I ask these icons who have asked us to help their industry … to help Eastern Kentucky by investing in that region of the state.”

The Senate also approved another alcohol-related measure; Senate Bill 12 would allow liquor sales at Kentucky Speedway in Sparta before 1 p.m. on Sundays.

The first bill to pass the Kentucky House also received bipartisan support. By an 80-11 vote, the lower chamber approved House Bill 40, which allows felonies to be expunged from the records of non-violent criminals.

Approximately 94,000 Kentuckians would be eligible to wipe their slates clean.

The bill would remove from public view the criminal records of Class D felons and those who were never formally accused or convicted of a Class D felony. The legislation also prohibits expunged files from being used in judicial or administrative proceedings involving hiring and other matters.

“There is an overwhelming and growing army of support for expunging the records of people who committed Class D felonies and helping these individuals become successful, productive, employable citizens  of the commonwealth,” said House Judiciary Chair Rep. Darryl Owens (D-Louisville).  Owens and Rep. David Floyd, (R-Bardstown) are primary sponsors of the bill, which is also supported by Governor Matt Bevin (R).

The Senate President, however, is expressing reservations.

“Am I opposed in theory to what they’re trying to do? Give the individual a second chance who’s not had any problems for five, 10, 12, 15 years? Had some juvenile indiscretions not necessarily being under the age of 18, but in their youth in college? No, I’m not opposed to that,” Stivers said.  “I don’t think most people are. But it’s the method and manner of how you do it so you don’t open Pandora’s Box to more problems than you already have.”

Stivers said expungement of a felony conviction would not necessarily remove the conviction from court records, which could complicate employer background checks.

According to the Legislative Research Commission (LRC), convicted felons could ask the courts to expunge their records five years after completion of their sentence or probation; Those accused of a felony, but never indicted or convicted, could apply for expungement much sooner. Sex offenders, those who committed an offense against a child or vulnerable adult, those with a prior felony conviction, those who have recently been convicted of a misdemeanor or violation, or those against whom charges are pending would not be eligible for felony expungement under HB 40. The bill was amended by the House to also exclude those convicted of felonies involving abuse of public office, human trafficking and child pornography.

The LRC reports other legislation on the move in Frankfort includes: 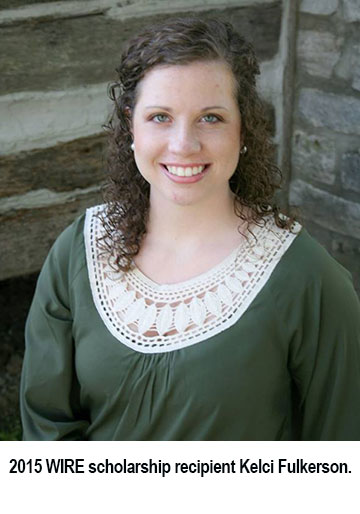 Since 1989, the Kentucky Chapter of Women in Rural Electrification (WIRE) has offered college scholarships to Kentucky college students to help them finish their degree. WIRE is now taking 2016 applications for three $1,000 scholarships.

Kelci Fulkerson is very grateful she was one of the 2015 scholarship recipients. “I’m attending graduate school now and it is more expensive. Receiving the WIRE scholarship helped relieve a little financial burden stress and I can focus more on school work.”

Kelci, who is studying speech language pathology, says she heard about the WIRE scholarship from her mother whose hometown is served by Warren RECC and it was her mother who encouraged her to apply.

WIRE scholarships are open to any eligible student whose family is served by a Kentucky electric cooperative and has at least 60 hours of credit at a Kentucky college or university by the start of the fall term. (Electric cooperative employees, directors, managers, and their relatives, and those of Big Rivers Electric Corporation, East Kentucky Power Cooperative, and the Kentucky Association of Electric Cooperatives, are not eligible.)

WIRE is an organization of women associated with Kentucky electric cooperatives. Members are wives of cooperative managers, board members, employees, employees themselves, and other women associated with electric co-ops in Kentucky. A yearly fundraising event is held in November with all proceeds going to the WIRE college scholarship program. Over the past 27 years, WIRE has given more than $91,000 in Kentucky college scholarships.

The deadline for submitting a WIRE college scholarship application is May 13, 2016.
DOWNLOAD THE 2016 WIRE APPLICATION.