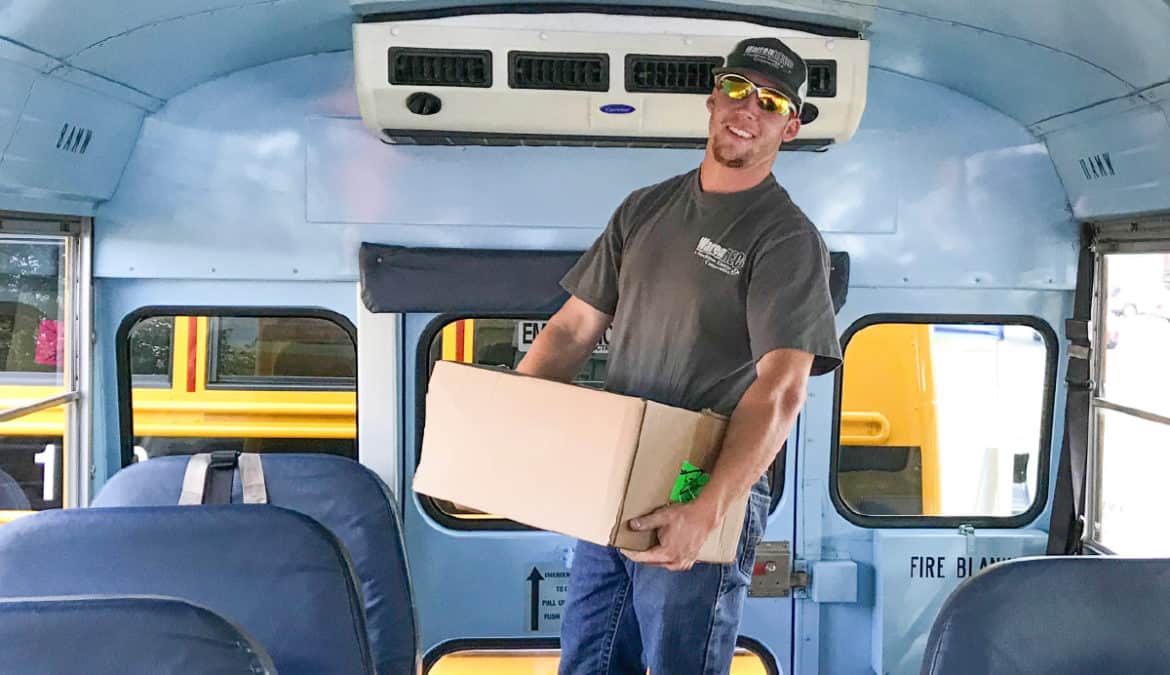 The first day of school is pure excitement unless…you don’t have the supplies needed.

Making sure every child has a memorable first-day-of-school experience regardless of background, home life or economic status is the goal of Stuff the Bus, a community event that helps provide school supplies to Warren County and Bowling Green school-age children.

Not surprisingly, Warren Rural Electric Cooperative Corporation (WRECC)is an important part of the program, which has grown every year since its start in 2005. Each year, community members come together to provide everything from basic school supplies to sports equipment and clothing to monetary donations—all to help area children and the schools they attend.

“WRECC employees live and work here,” says Kim Phelps, Communications and Public Relations director, who organized the cooperative’s efforts this year. “This program is so attractive to us because 100 percent of the donations go to the kids, and they stay in the county where they were donated. Stuff the Bus gives us yet another chance to interact with our communities, and our employees really enjoy that.”

“This year, Stuff the Bus made a big leap in growth through a partnership with Houchens Industries,” Phelps says. “With this partnership, Stuff the Bus went on the road to several communities in our service territory, hosting parking lot parties at Houchens-affiliated stores (IGA, Save-A-Lot, among others). Each event was to collect donations but also to encourage shoppers to grab something while they shopped and donate it. Houchens matched everything purchased at their stores.”

“Our staff served as community ambassadors, meeting each customer with a smile,” Phelps says. “We also helped by shopping with donated dollars so those donations could be doubled for their communities. In Bowling Green, we flew a donation banner on a bucket truck to help attract the public, helped pick up corporate donations and literally helped ‘stuff the bus.’”

“As for next year, we’ll be doing it bigger and better. Everyone is committed to starting earlier and growing next year. I just think that’s a great testament to the Warren RECC folks. They have the biggest hearts,” says Phelps. 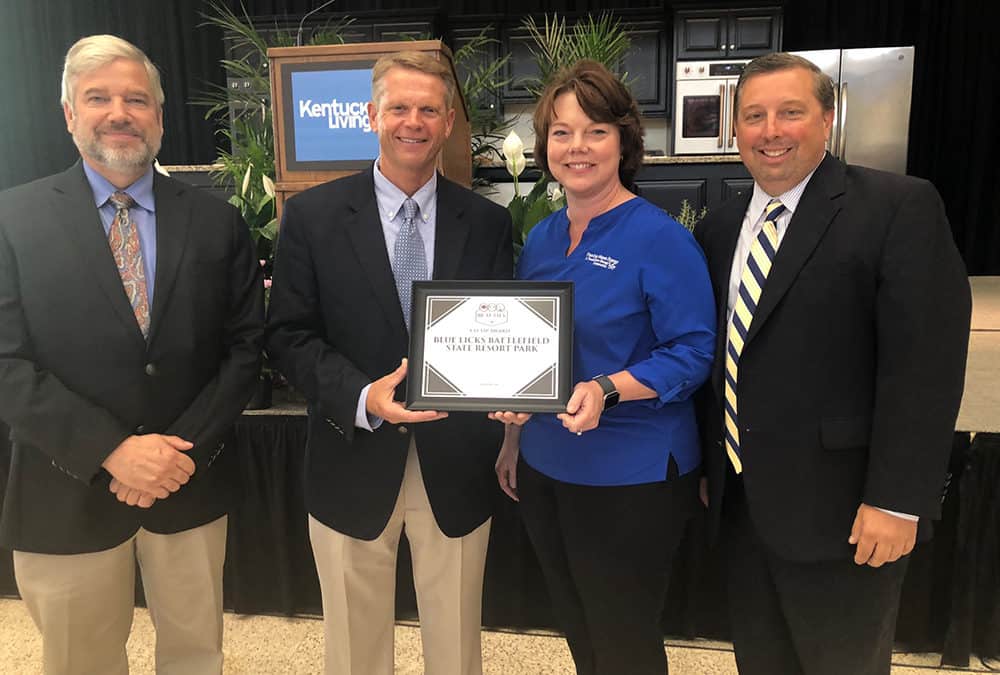 After months of folks all across Kentucky rolling up their sleeves to pick up trash, plant flowers and paint murals on what were once blank walls, the 2018 Beautify the Bluegrass project has come to an end. The initiative was a collaboration between Governor Matt Bevin and Kentucky Living.

In all, 23 projects were entered. The overall winner, as selected by Gov. Bevin from finalists voted by Kentucky Livingreaders, was Mt. Sterling, which beautified a central area in the city. The London Downtown Board/City of London Tourism received the Commonwealth’s Award for its restoration of a dilapidated graveyard.

Kentucky’s electric cooperatives played a big role in the beautification initiative, with 10 co-ops entering projects. Fleming-Mason Energy was selected as the winner of the Governor’s Cooperative Award for its work on repairing playgrounds and reviving the pollinator garden at Blue Licks Battlefield State Resort Park.

Here are the other co-op entries:

BIG RIVERS ELECTRIC CORPORATION employees divided their time between two projects in June. Since the company covers a 22-county service territory, one park in Henderson and one park in Owensboro were selected for cleanup efforts. A team of employees spent a full day at John James Audubon State Park in Henderson picking up trash and clearing weeds from the campground and other park property. Another team dedicated a full day to spreading mulch and painting the ball field facilities at Panther Creek Park in Owensboro.

BIG SANDY RURAL ELECTRIC COOPERATIVE employees chose to landscape the entrance to our local state park. They chose this project in hopes of catching the eye of folks who would otherwise pass by this gem hidden in the hills of Eastern Kentucky. They felt they have such a beautiful state park in the community, they wanted to highlight this part of it.

CLARK ENERGY AND EAST KENTUCKY POWER COOPERATIVE weeded, planted flowers and spread 36 bags of mulch at the Welcome to Winchester sign on KY Route 627. Working on the weekends, co-op staff and family pulled weeds, purchased the mulch at Lowe’s and then made repeated trips to spread it. Co-op representatives planted begonias and coleus flowers.

JACKSON ENERGY COOPERATIVE partnered with the Four Seasons Garden Club of Irvine, to rejuvenate their Monarch Waystation located at the West Irvine Intermediate School. This waystation was originally created to provide a unique habitat specially designed for the monarch butterfly.

Although the waystation provides food and rest for all life-stages of these magnificent creatures, this waystation also serves as an outdoor classroom for the students at West Irvine Intermediate. The students get to see firsthand not only the importance of the garden itself, but the precious life cycles that unfold before their eyes. This waystation is also accessible to the Irvine community to appreciate, observe and enjoy.

PENNYRILE ELECTRIC identified Pennyrile State Park for their project. They developed a plan to level out 10 different areas and prepare a surface for concrete pavers. After the prep work was done, with assistance from the Christian County Jail, Pennyrile Electric employees began leveling each area and laying pavers in place. They also planted some flowers in large pots and placed them at various locations around the tables.

This project came together with the assistance of several local businesses. Lowes of Hopkinsville provided material at a discounted rate. The Christian County Jail crew came out and provided equipment and labor to level the selected areas and prepare them for the pavers. The rock and sand were donated by Rogers Group and hauled to the location by Tom Gamble Trucking free of charge.

SHELBY ENERGY improved the appearance of the Shelby County Annex Building by removing old trees and shrubs, trimmed and weeded, and planted flowers and put down new mulch.

SOUTH KENTUCKY RECC had 45 of its Somerset employees participate in the local, recent PRIDE cleanup day in Pulaski Co. Employees picked up trash on Parkers Mill Rd, Electric Ave, Weddle Ln, Regency Rd, and Enterprise Dr. It is something they try to participate in every year—helping to beautify their community.

WEST KENTUCKY RURAL ELECTRIC COOPERATIVE decided to beautify the entrance to one of western Kentucky’s most important tourism venues, Kenlake State Resort Park. The park is located in Marshall County, on the shores of Kentucky Lake and near the Land Between The Lakes, a national recreation area.

Over a span of three days, the team cleared old, overgrown landscaping around the park’s entrance sign, set new poles and upgraded wiring for the sign, enlarged the planting bed around the sign, laid new border stones, and set a carefully planned selection of new landscape plants.

The project was selected and coordinated by WKRECC’s Community Engagement Committee. The project team was compiled of employees, managers and board members, all of whom lent a particular expertise. The team also worked closely with Kenlake Park management to ensure the work met all necessary requirements.

The 2018 Beautify the Bluegrass project was a great success thanks to everyone who contributed. You each should feel very proud of your contributions to improve our communities and state.

Details about the 2019 Beautify the Bluegrass will be announced in the next few months. 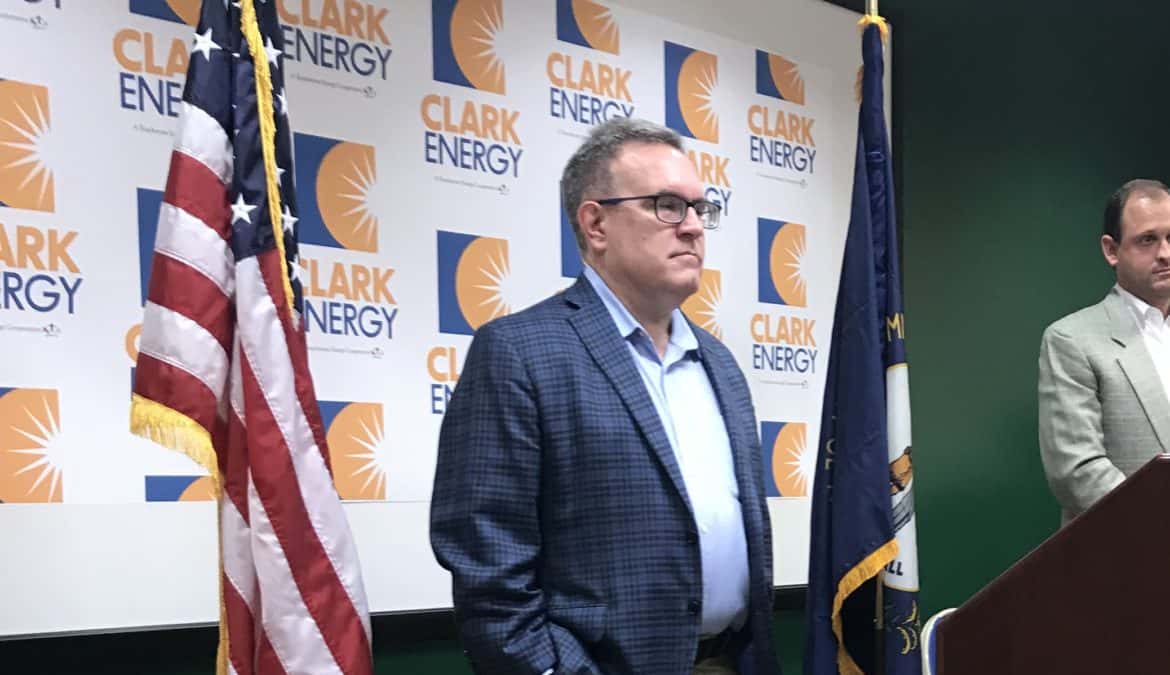 The statewide association representing all 26 electric cooperatives in Kentucky joins electric co-ops across the country who are encouraged by the EPA’s efforts to replace the Clean Power Plan with a more workable rule.

“As our co-ops assess the EPA’s latest proposal, it is gratifying that the agency recognizes the need for a more flexible rule that will potentially reduce compliance costs for coal-based generation while sustaining reliability,” said Chris Perry, president and CEO of the Kentucky Association of Electric Cooperatives. “Without this important shift, the Clean Power Plan threatened both the reliability and affordability of the electricity provided by Kentucky co-ops.”

I need to replace several old appliances. Will the appliance choices I make have much impact on my energy bill?—Chelsea 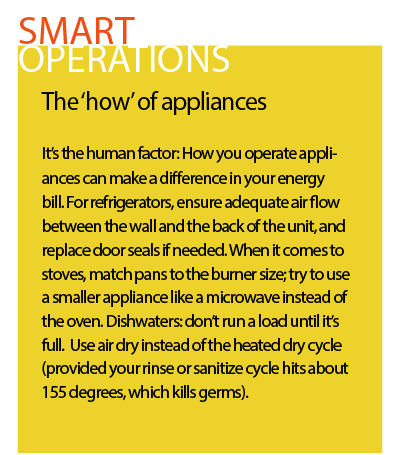 Appliance energy use is usually less, on average, than home heating and cooling bills, but can be several hundred dollars each year. The variables include the model, and how often it’s used and at what settings.

Consider how much you use the appliance. The more you use it, the greater your savings will be from choosing a more efficient model. If you don’t use the appliance often or have a small household, you may get by with a smaller refrigerator or freezer, which will save you money.

Look for the labels

Over the last few decades, new appliances have become more energy efficient, driven partly by minimum government standards. Appliances are required to include an Energy Guide label that shows estimated energy use and annual operating cost, so you can compare models and calculate the initial cost against the long-term savings. You also can look for appliances that have an ENERGY STAR label, indicating they are substantially more efficient than the minimum standard. For example, replacing a 20-year-old refrigerator with a new ENERGY STAR model can lower that appliance’s monthly electricity cost by 75 percent. KL