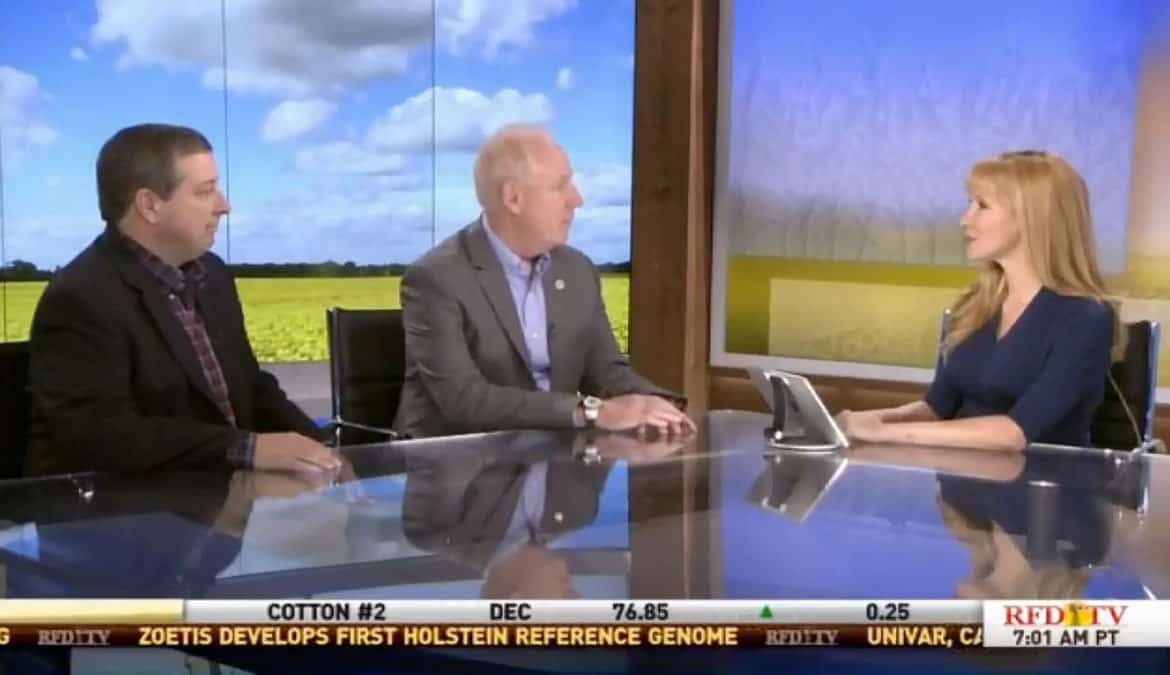 In a series of interviews aired live on RFD-TV’s Market Day Report, KAEC President and CEO Chris Perry and co-op leaders from several other states explained the significance of electric cooperatives and major issues facing co-ops and rural America.

Perry, who has led both KAEC and United Utility Supply since 2014, touched on a number of important issues, including economic development, the ever-evolving energy mix, and KAEC’s mission to improve the quality of life in rural Kentucky.

“It traces back nearly 80 years ago to the New Deal,” Perry explained. “That’s when nobody wanted to go to these rural areas to serve energy. So, farmers and business people got together and said, ‘We need that out in our areas as well.’ So, that’s what we did. We came together and started building lines.”

“It’s very interesting,” Perry continued. “For cooperatives, we’re about six to eight customers per mile out in rural areas. In big cities such as Nashville, it’s upwards of 30 to 40 customers per mile. So, we’re doing a lot with a lot less customers.”

Perry was interviewed by RFD-TV anchors Christina Loren and Janet Adkison, who both expressed appreciation for the commitment of rural electric cooperatives.

“Thanks for doing what you do for our rural residents out there,” Loren said.

Based in Nashville, RFD-TV is the nation’s first 24-hour television network featuring programming focused on the agribusiness, equine and the rural lifestyles, along with traditional country music and entertainment. RFD-TV supports rural America and is available in more than 50 million homes.

The co-op leaders visited the RFD-TV’s studios while in Nashville for the NRECA Annual Meeting.

During the interviews, Perry highlighted the innovation of Kentucky’s electric cooperatives, including renewable energy projects such as Cooperative Solar from Kentucky’s Touchstone Energy Cooperatives. He also explained how Kentucky co-ops have dramatically reduced emissions from power plants, and addressed how co-ops play a role in encouraging young, talented Kentuckians to continue to live in rural areas.

“That’s a real challenge we have,” Perry said. “Think of bringing engineers and financial people back when they graduate from the University of Kentucky. Many of them don’t go back to these rural areas, so that’s something we’re really working on as rural electric cooperatives. Technology is driving us and we’re not in the past but we need those talented students to come back home.”

Perry noted the investment in youth by Kentucky’s electric cooperatives who sponsor the civic engagement and leadership training of more than 100 high school students on both the Frankfort Youth Tour and Washington Youth Tour. Both programs are administered by the Kentucky Association of Electric Cooperatives.

Perry previously served as CEO of Fleming-Mason Energy Co-op, and in several management and engineering positions in Kentucky and Florida. As a co-op leader, Perry is noted for his expertise in advanced metering and control systems and advanced modeling in load forecasting.

A graduate of Leadership Kentucky, Perry is former president of the Fleming County Chamber of Commerce. He is certified as a professional engineer in the commonwealth of Kentucky and is a member of the Institute of Electrical and Electronic Engineers and the Rural Electric Statewide Managers Association. He serves on the boards of both the Kentucky Chamber and the Kentucky Association of Manufacturers.

Customers advised to look into payment plans or heating assistance

Prolonged and severe cold in December and January has led to sharply higher electric bills for customers across Kentucky, the Kentucky Public Service Commission (PSC) says.

For many customers – particularly those who heat entirely or primarily with electricity – bills received from late December through January have been much larger than those for the previous billing period.

That is because the National Weather Service (NWS) measure that tracks the need for home heating was, in December, about 75 percent higher than in November. January heating demand was up another 14 percent over December, or roughly double that in November.

“When you have prolonged periods of sub-freezing weather, as we have had this winter in Kentucky, the amount of energy needed to heat your home goes up dramatically,” PSC Chairman Michael Schmitt said. “And energy usage is by far the most important factor in determining energy costs.”

Schmitt said customers who are concerned about high electric bills should first contact their utility company for information about payment plans or heating assistance.

“The PSC consumer services staff will do all they can to help customers who cannot resolve issues with their utility providers,” he said. “They also can guide people to sources of assistance in their communities.”

Almost all of the hundreds of inquiries about high energy bills the PSC has received since late December have been about electric service. Customers who heat with natural gas have not seen comparable increases.

That is because the amount of electricity needed for heating rises sharply in times of extreme cold. Even the most efficient heat pumps won’t work very well once the temperature drops more than a few degrees below freezing.

During periods of prolonged cold, all-electric heating systems switch on resistance (or strip) heating, which consumes much more electricity than the heat pump. “It’s like heating your house with a large toaster, and your usage goes up exponentially as a result,” Schmitt said.

Electric consumption this winter not only rose sharply as milder weather in November turned colder in December and January, but also significantly from last year due to the much colder weather. November and December of 2016 and January of 2017 were all warmer than normal, as measured by the NWS.

The chart below shows the heating degree days for November, December and January of this winter and last winter, with the departure from normal in parentheses for each month (+ means colder than normal; – means warmer). The numbers are an average of eight weather stations spanning Kentucky. (Details for each weather station follow this release.)

“Electric utilities in Kentucky offer even-payment plans that enable customers to reduce month-to-month fluctuations in their bills,” he said. “Energy bills become predictable and are far less subject to weather-related swings. Customers should contact their utility for more information.”

Utilities also may make one-time payment plan arrangements with customers. PSC regulations require a utility to offer a payment plan only after a customer receives a disconnect notice and only to customers who do not have previously unpaid bills. But utilities may offer such plans under other circumstances at their discretion.

Schmitt said customers who are having trouble paying their bills should check to see whether they are eligible for heating assistance, either through the Low-income Home Energy Assistance Program, or LIHEAP, which is operated by local community action agencies, or through programs operated by their utility provider.

In the long term, the best way to combat high energy usage is through energy conservation, Schmitt said. Even modest investments, such as adding weather stripping around doors and windows or switching to high-efficiency lighting, can pay off in lower electric bills, he said.

The PSC is an independent agency attached for administrative purposes to the Energy and Environment Cabinet. It regulates more than 1,500 gas, water, sewer, electric and telecommunication utilities operating in Kentucky. 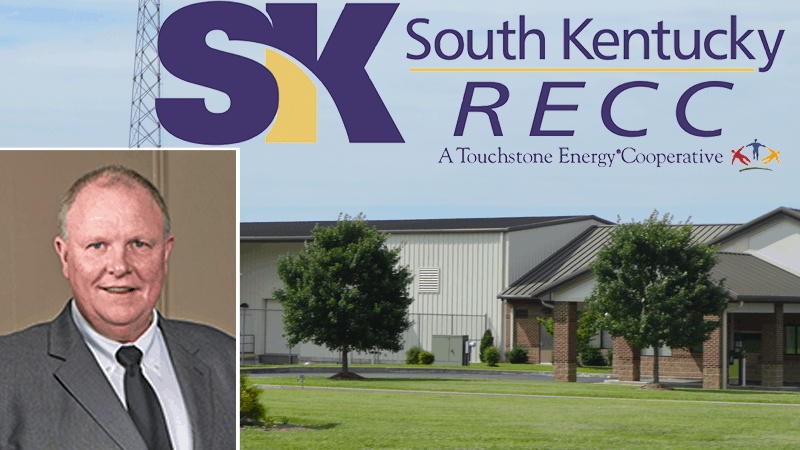 Holt, who has been serving as Interim CEO since June, is a Pulaski County native who has worked for South Kentucky RECC for 39 years, most recently as the Vice President of Engineering.  He has a comprehensive knowledge of SKRECC including engineering, construction, right-of-way, mapping, warehousing, transportation, member services, public relations and dispatch. He has held a various senior management positions at the cooperative for over 14 years. Holt is a 2001 graduate of the National Rural Electric Cooperative Association’s Robert I. Kabat Management Internship Program and attended Somerset Community College with an emphasis on Business Administration and Electrical Engineering. He has served on statewide cooperative-related boards and in various civic groups in the community.

“The board is very excited about bringing someone with Holt’s qualifications on as South Kentucky’s new CEO,” said South Kentucky Board Chairman Greg Redmon. “We believe he has the skills to continue offering the service and excellence our members expect and deserve.”

Holt stated, “I look forward to the Cooperative continuing to provide reliable service that is member focused.”