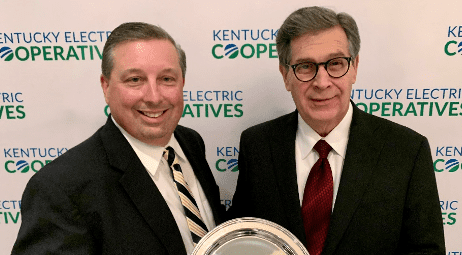 LOUISVILLE, Ky. (November 17, 2021) — Longtime agriculture leader David Beck, the president and CEO of Kentucky Venues and former head of the Kentucky Farm Bureau, was honored as the “2021 Distinguished Rural Kentuckian” at the 75th Annual Meeting of Kentucky Electric Cooperatives. The award is the highest honor bestowed by Kentucky’s electric cooperatives, which consists of 26 co-ops across the commonwealth.

Following a video tribute to Beck at the 75th Annual Meeting Banquet of Kentucky Electric Cooperatives on Monday, November 15, the Lyon County native and distinguished Murray State University alumnus said he was humbled to be selected to join the illustrious list of past honorees. The tribute and speeches from the co-op meeting can be viewed on the YouTube channel of Kentucky Electric Cooperatives.

“As a young boy growing up at the end of a gravel road, you never know where life is going to take you,” Beck told the crowd of several hundred people from co-ops and invited guests, paying tribute to those who mentored him and gave him opportunities throughout his career. “True leadership is being able to cause people to believe in themselves and not just yourself.”

The cooperative meeting also included a keynote address by 2018 Distinguished Rural Kentuckian Warren Beeler, who shared both his passion for the progress, science and technology of Kentucky agriculture and life lessons on and off the farm. The keynote speaker at the association’s closing breakfast was former U.S. Ambassador to the United Nations, Kelly Craft, who emphasized the importance of the proven reliability of the electric grid amid pressures to transition to less reliable sources of energy generation.

“David Beck’s dedication to improving the lives and livelihoods of Kentuckians echoes the mission of the commonwealth’s electric cooperatives and the purpose of this award,” said Chris Perry, president and CEO of Kentucky Electric Cooperatives. “David is a faithful ally of electric co-ops who have long appreciated his partnership and trust.”

The 75th Annual Meeting also included highlights from the statewide association’s archives with photos and film from throughout Kentucky co-op history which dates to 1936 when the Rural Electrification Administration approved the first loan for a Kentucky co-op. At the time, only three percent of Kentucky farms had electric service. Over the next decade, local Kentuckians in rural communities created the co-ops that to this day are still locally owned and controlled, providing electric service to about 1.5 million Kentuckians in 117 of the commonwealth’s 120 counties. The statewide association was incorporated in 1943 and began operations in 1948, after the first Annual Meeting on June 22, 1947.

In his update to association membership, Perry explained that the goals of the association today remain consistent with those of its first president, J.K. Smith, who in 1948 laid out the plan to support, advocate and educate on behalf of member cooperatives. Perry emphasized recent investments in the statewide organization’s Safety and Loss Prevention team that works with co-ops on specific training and the promotion of a safety culture. The team also supports the mutual aid efforts of electric cooperatives which in 2021 included a massive response to back-to-back-to-back ice and snowstorms that required in many cases a rebuilding of the electric distribution system in hard hit areas of eastern Kentucky.

Despite a strong financial report from the association and its United Utility Supply Cooperative, a leading material supply organizations serving the rural electric market in 17 states, Perry noted that the inflationary pressures and supply-chain disruptions being experienced across the country demand constant attention and are a concern. He was among several speakers to emphasize the need for effective and transparent communications with consumer-members and policymakers, citing the success of Kentucky Living magazine as a key resource and part of an expanding communications portfolio to convey co-op information and support economic development, safety and member education. As was in the case in 1948, the association continues to provide support for co-op annual meetings across the state.

Finally, Perry underscored the role of Kentucky’s electric cooperatives as the trusted energy advisors for local consumer-members as new technologies and standards emerge, such as the electric vehicle revolution and renewable energy issues.

In her address to close out the meeting, Ambassador Craft stressed the importance of reliable electricity and cautioned that global carbon agreements threaten to undermine the reliability of both America’s electric grid and the aspirations of developing nations.

“You all know reality,” Craft told the co-op gathering. “And one reality that is as old as time is the following: you do not abandon what works and what you know works.” 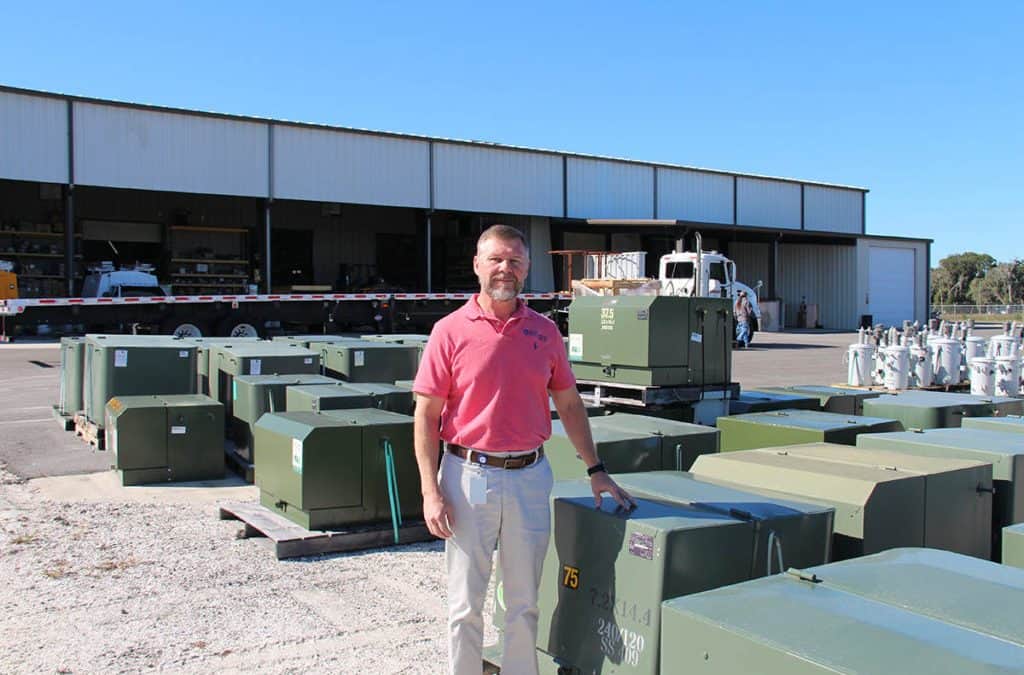 As electric cooperatives contend with global supply chain disruptions caused by the COVID-19 pandemic, they’re working with their suppliers, vendors and logistics providers to meet demand for parts and other key components essential to keeping power flowing.

“We’re facing long lead times for pad-mounted transformers and PVC pipe used for conduits for underground distribution,” said Tim Gibson, purchasing agent for Wauchula, Florida-based Peace River Electric Cooperative. “Digital meter availability has also been a big problem due to the worldwide shortage of microchips, so we’ve projected six-month demand and ordered them for staggered delivery to meet our needs.”

Long lead times for some parts, like polyvinyl chloride pipe and fittings, have been extended due to feed stock shortages or curtailed operations at petrochemical plants in Texas and Louisiana caused by weather or staffing challenges. Pandemic-related concerns and shipping delays have also prompted some warehouse managers to increase reserves on hand by doubling and even tripling up on their inventories.

“We’re routinely looking at the usage history of our customers so we can anticipate their actual demand for 2022 and the following year,” said Bret Curry, sales manager at Arkansas Electric Cooperatives Inc. The Little Rock-based logistics and service arm of the Arkansas statewide association serves as the principal parts and equipment supplier for about 400 utilities, including co-ops in five Mid-South states.

Among the strategies TEC has employed to address the supply shortage has been meeting demand with reconditioned equipment, like meters and transformers.

“This approach has worked extremely well for TEC due to the support of companies like Emerald Transformer and Allegiant Utility Services, which manufacturers and refurbishes meters,” said Andrews. “Both of these organizations have stock of refurbished equipment, offer product warranties that are similar or better than the original equipment manufacturers and can also refurbish and repair the co-ops’ equipment as well.”

While several EUDA members are advising clients that logistics challenges could linger well into 2023, the end of the 2021 Atlantic hurricane season may provide a bit of relief. Storm activity along the Gulf and Atlantic coasts has been less damaging than normal this year, and seasonal reserves of parts and equipment built up since the spring will begin flowing back into inventories in December.

Still, co-ops are being encouraged to work with local developers on major projects to divide larger jobs into several phases, allowing for delivery of essential parts and components over extended periods.

“The key is planning, particularly for large developments or subdivisions slated for construction over the next three to four years,” said AECI’s Curry. “Talk to your builders and developers and tell them just what we’re telling our distribution co-ops. If they tell you they need to build out infrastructure for 100 new homes tomorrow, that’s not likely to be possible in this environment, and there are no hard expectations of that improving anytime soon.”