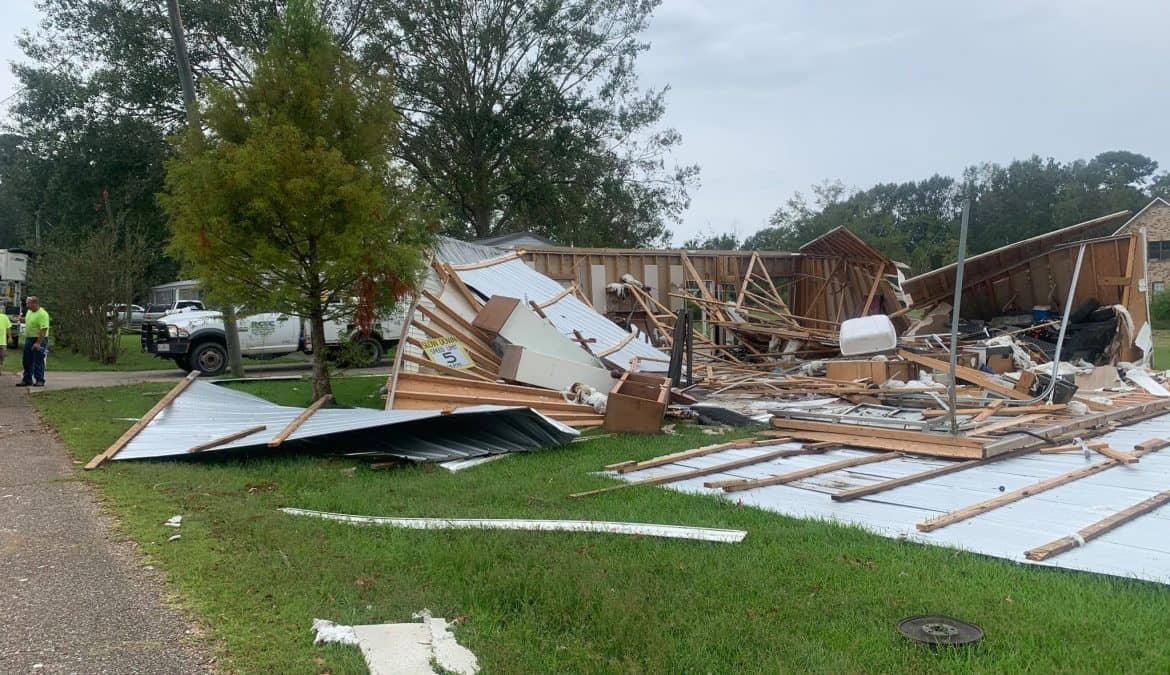 Kentucky co-op crews helping restore power in Louisiana are sharing photos of their experience and the devastation left behind by Hurricane Ida 11 days ago.

The photos show homes and businesses destroyed by winds exceeding 100 miles-per-hour, power restoration efforts in swampy marshlands and Louisiana residents thanking the line technicians for their dedication and hard work.

In addition to more than 120 contractors released by Kentucky co-ops, more than 40 Kentucky co-op personnel are assisting DEMCO, an electric cooperative serving the Greater Baton Rouge area. The co-op reports 78 percent meter-restoration, with remaining outages of 23,911.

On social media, the co-op is reminding its members that restoration of the electric grid is a multi-step process after a severe storm such as Hurricane Ida. “Major transmission must be restored in order to distribute large amounts of power through Louisiana, along with replacing hundreds of power poles and thousands of miles of power lines in hard to reach areas. Mutual assistance crews are here helping, but this is a lengthy process,” the co-op reported.

“The damage is extensive and devastating,” says Charlie Lewis, the mutual aid coordinator for Kentucky Electric Cooperatives. “Kentucky co-op crews are working long hours in very challenging conditions. In addition to a tremendous amount of debris and big jobs to replace hundreds of utility poles, the crews face hot and humid conditions with occasional thunderstorms. The people of Louisiana have been so gracious and grateful for the help our crews are providing. We continue to pray for everyone’s safety and for power to be restored as quickly as safety protocols allow.”

The top priority of each local Kentucky co-op is service to its own consumer-members.  Before committing resources to mutual aid requests, each co-op ensures it has ample crews available for all local needs, including routine maintenance and emergencies. 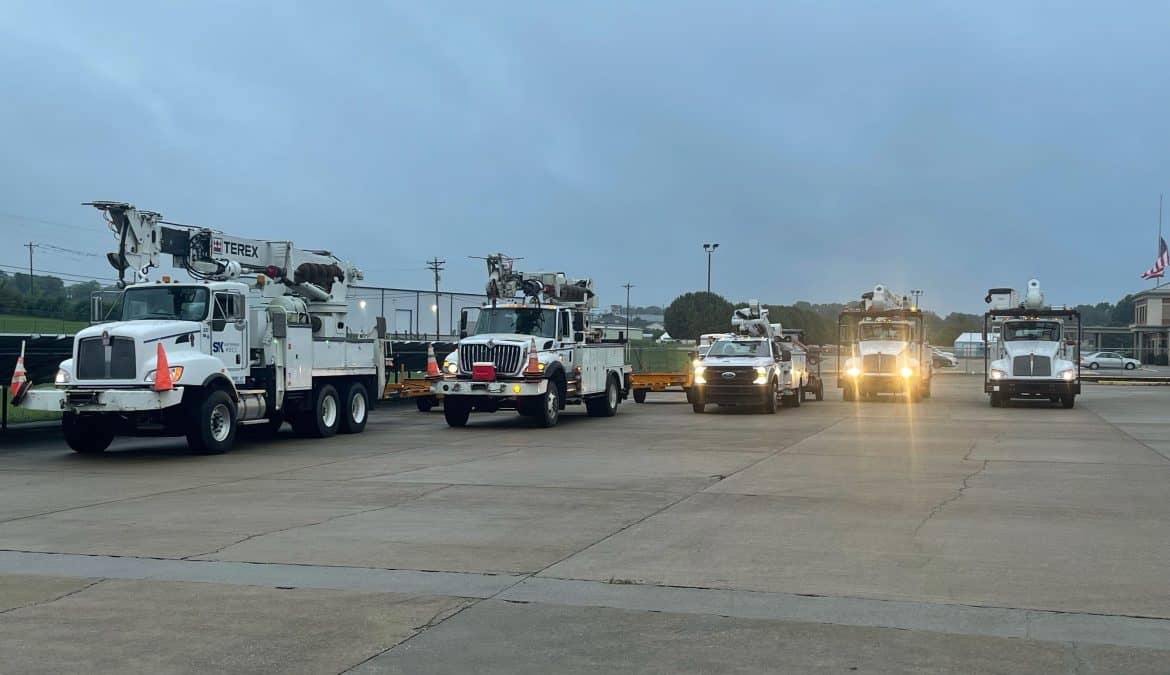 “Washington-St. Tammany Electric anticipates having everyone who can accept power fully restored within three weeks,” wrote officials from the Mandeville-based co-op in a weekend social media post.

WSTE has 650 broken poles and miles of downed conductor to replace, but with the help of hundreds of co-op mutual aid crews and contractors, the co-op has restored power to all but about 8,000 of its 52,000 meters.

“Lines with the largest number of members requiring the least amount of time will be restored first,” the co-op advised members. All seven transmission delivery points and 33 substations on its system are now energized, and distribution points are now the focus of restoration work.

“We must go from the source outward to the end,” said WSTE General Manager Charles Hill, comparing the systematic approach standard for power restoration to the design of a coin purse, wider at the bottom than at the drawstring securing the top.

“Groups will be energized before individuals,” wrote Hill, adding that crews will be shifted to other areas in need of help once work is completed, and service crews will ultimately be deployed to restore individual connections and smaller groups.

With the help of 800 line technicians, vegetation management and support personnel, Dixie Electric Membership Corp. is battling back from near total system failure and now has 75% of its meters back in service.

“Transmission and distribution infrastructure were severely damaged or obliterated,” co-op officials wrote Monday. The Greenwell Springs-based co-op has 29,000 members still without power and is offering projections of a few days to up to four weeks for various parts of its service territory, contingent upon damage, accessibility and whether homes can safely receive power.

“Restoration estimates are based on knowledge we have at this time,” officials cautioned. “Unforeseen challenges are always possible and may alter these predictions.”

Where possible, the co-op is now rerouting power from other points to help get members back online. Up to 400 of its damaged poles still need to be replaced.

Electric co-ops serving the region receive their power from transmission systems operated by other utilities actively working to rebuild structural steel towers toppled by the Category 4 storm’s 150 mph-plus winds. The transmission providers continue to beef up their restoration efforts, and with most damage assessments completed, transmission repairs are expected to be wrapped up by midweek.

“Without transmission we will not be able to energize any lines, this is out of SLECA’s control,” said Joe Ticheli, general manager of Houma-based South Louisiana Electric Cooperative Association. “We continue to ask for your patience during this long ordeal.”

But with 1,100 contract and mutual aid co-op personnel on the ground across its service territory, SLECA’s largest-ever restoration effort is in full swing.

“Crews are setting poles, stringing wire, removing debris and rebuilding SLECA’s electric infrastructure that took over 83 years to build, across two parishes,” Ticheli said. “Even with the progress being made and the army of ‘boots on the ground,’ it will be a long process.”

More than 19,000 of SLECA’s 21,000 meters were out in the hours after the storm. Some of the most challenging restoration work is still ahead, with more than 17,000 meters still out, over 1,000 broken distribution poles being replaced and tracked vehicles being used in off-road areas.

The Association of Louisiana Electric Cooperatives continues to coordinate mutual aid crews and is working to address fuel, lodging and logistics issues for visiting crews and contractors.

“Preparations are gearing up to fill a second round of mutual aid requests aimed at replacing out-of- state crews initially committed to assignments lasting up to two weeks,” said Addie Armato, acting CEO of the statewide association. “We are also working with our mutual aid partners to help locate and source materials that are hard to find.”

While most co-ops in Mississippi completed restoration work last week, Summit-based Magnolia Electric Power Association was still finishing repairs Tuesday, though outages were down to less than 200 of its 35,200 meters. Restoration is expected to formally conclude Wednesday, but local crews could spend weeks collecting broken poles and other debris and making permanent repairs to co-op infrastructure. 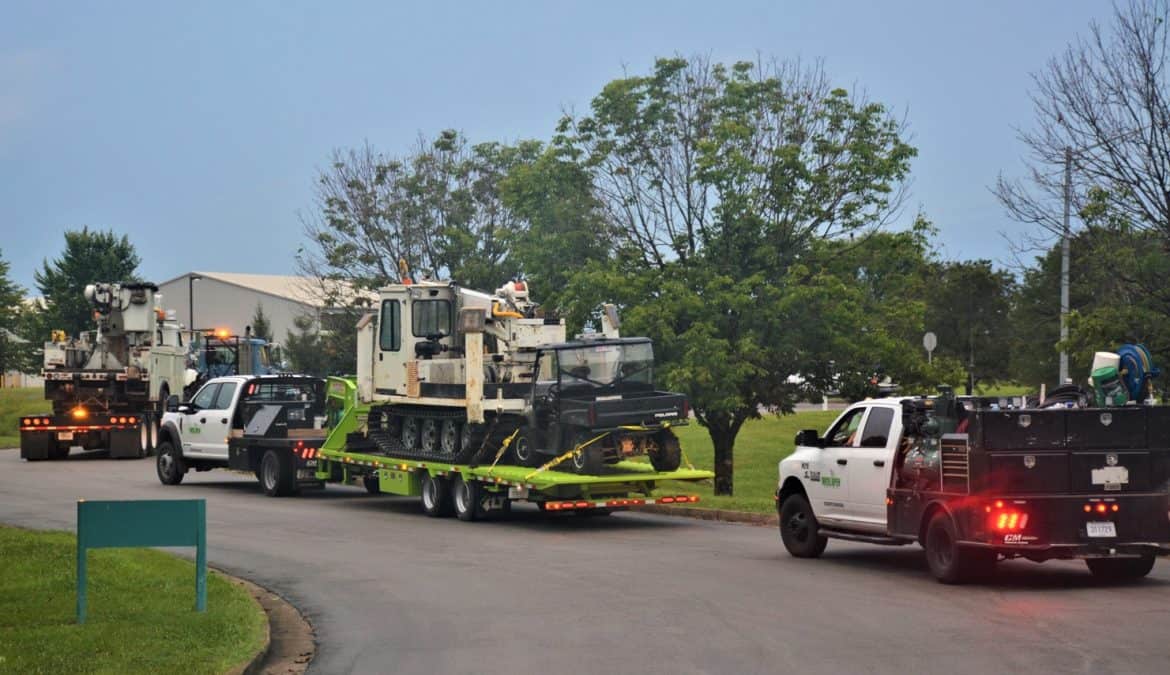 More than 160 personnel and contractors head to Louisiana

More than 160 personnel and contractors from electric cooperatives in Kentucky are providing mutual aid to help restore power in Louisiana after Hurricane Ida.

“The catastrophic damage to electric infrastructure caused by Hurricane Ida will require a massive team effort to restore power,” said Chris Perry, president and CEO of Kentucky Electric Cooperatives. “We are praying for our sister co-ops in the region and for the safety of everyone assisting. By responding to natural disasters in other states, Kentucky co-op crews gain invaluable experience to ultimately help them respond to outages here at home.”

Crews from Nolin RECC and the co-op’s Wide Open Utility Service subsidiary rolled out Tuesday. Crews from Kenergy Corp. and South Kentucky RECC are heading to Louisiana on Wednesday, and co-op crews from Shelby Energy and Fleming-Mason Energy are scheduled to deploy on Thursday.

DEMCO, the largest co-op in Louisiana, reports extensive damage to transmission poles and substation transformers. “Restoration will be a weeks-long effort,” said Randy Pierce, DEMCO CEO and General Manager. Sixty transmission poles are down as well as more than 300 three-phase poles, which affects an estimated 60,000-80,000 co-op consumer-members.