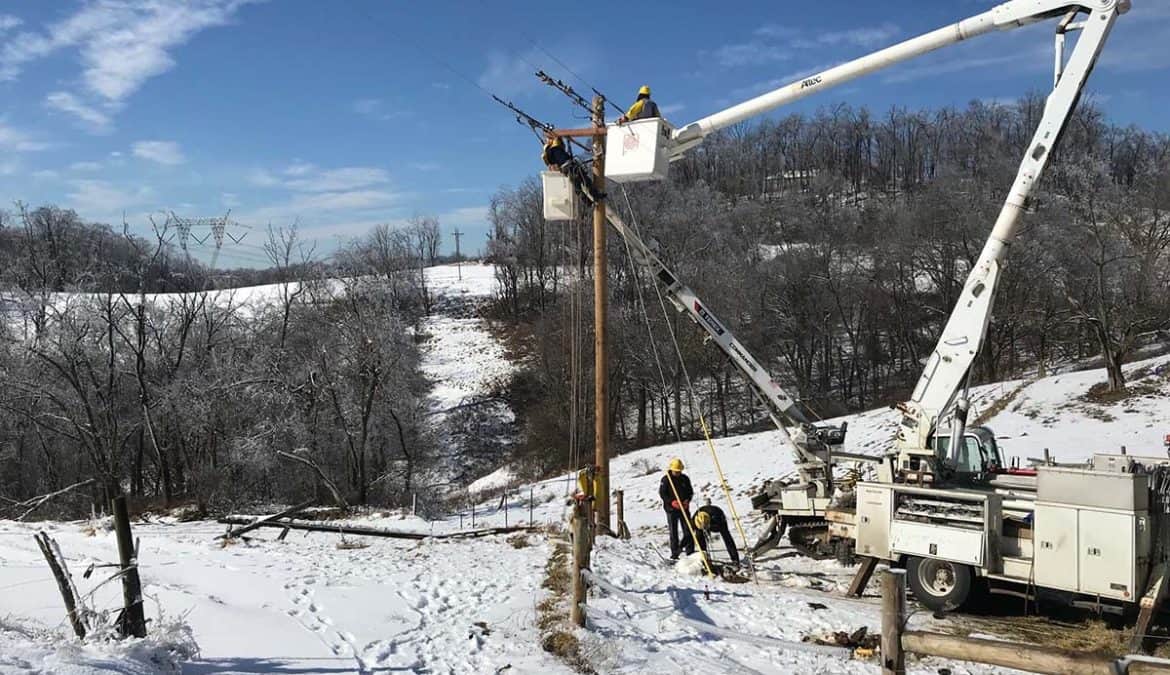 “At the peak of the outages, our statewide total topped 15,000,” said Rob Roedel, a spokesman for Arkansas Electric Cooperatives Inc., adding that most of the affected co-ops were able to handle restoration with local personnel and contractors.

C& L Electric wrapped up restoration to about 6,300 of its affected members Saturday morning.

In Tennessee, crews worked through the weekend to complete most restoration.

“Damage caused by ice was widespread and create extended power outages,” said Trent Scott, vice president of corporate strategy for the Tennessee Electric Cooperative Association. “We had a total of 24,000 meters out on co-op lines at the height of the event last Thursday.”

Somerville-based Chickasaw Electric Cooperative had about 14,000 of its 21,000 meters out and was down to less than 300 meters out by Sunday morning, wrapping up restoration work Monday afternoon.

Gibson Electric Membership Corp., which serves eight counties in western Tennessee and four in western Kentucky, reported nearly 2,900 of its 39,000 meters out of service last Thursday, but all members who could safely receive power on their property had service restored by Friday evening.

“Ice is extremely challenging for utilities,” said Dan Rodamaker, president and CEO of Trenton, Tennessee-based Gibson EMC, adding that both the co-op’s electrical system and its high-speed internet fiber network were affected.

“We sincerely appreciate our members’ patience and understanding as we have worked to restore electric and fiber service,” Rodamaker said.

Kentucky co-ops reported about 8,500 members out, with Henderson-based Kenergyaccounting for about half of that. Most restoration work was completed by late Friday.

In Ohio, crews worked to restore power to 28,000 members in seven co-op-served territories. Lancaster-based South Central Power Company had about 21,000 of its more than 122,000 meters out following the storm, and restoration work to about 2,300 members continued Tuesday.

Co-ops in Indiana, Illinois and surrounding states reported scattered outages with most of those restoration projects resolved by local crews.