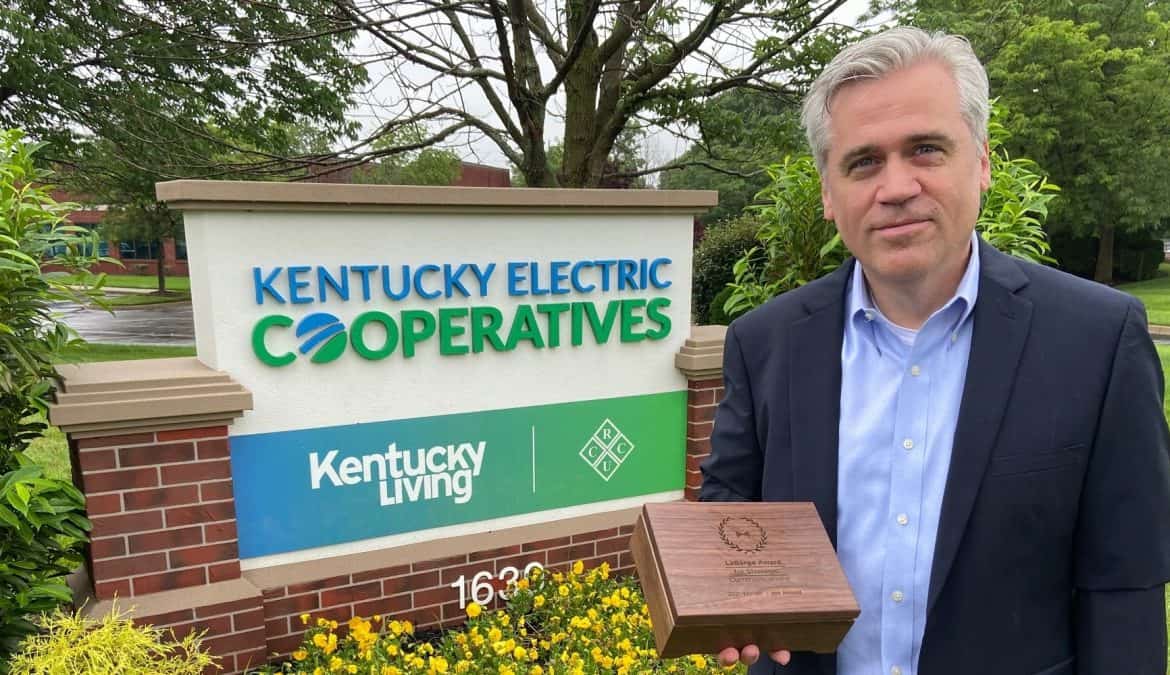 The energy industry promotes an all-of-the-above strategy so that not just one fuel source provides power. It’s the same thing for communications, says Kentucky Electric Cooperatives’ Joe Arnold, winner of the 2021 LaBerge Award for Excellence in Strategic Communication, announced Wednesday during the virtual Connect conference of co-op communicators.

“You just can’t just rely upon one source. We have an amazing magazine, Kentucky Living, which effectively reaches the entire commonwealth. But you can’t stop there. Social media, website traffic, video production, email and grassroots campaigns…You need all of those things combined to effectively and meaningfully reach our consumer-members,” said Arnold, the statewide association’s vice president of strategic communications.

“If you aren’t telling your story, somebody else will,” Arnold said. “This is why Kentucky Living magazine is such a critical component for co-ops. Local co-op consumer-members are bombarded with conflicting messages from social media, mainstream media and others who do not have cooperatives’ best interests at heart. The fact that Kentucky’s electric cooperatives actually own their own trusted media outlet is a tremendous asset and its value cannot be underestimated as ‘baseload generation’ of our all-of-the-above strategy.”

The LaBerge Award recognizes a co-op communicator with demonstrated excellence, influence and impact in co-op communications, both as a practitioner and contributor across the network. It was established in 2018 in memory of Justin LaBerge, senior leadership communications manager for NRECA.

Arnold, a veteran journalist at several Louisville outlets for more than 25 years, relied on the “all-of-the-above” approach when he was hired by Kentucky Electric Cooperatives nearly six years ago with the charge to bring a strategic approach to communications. He reorganized the department to match talent with emerging public relations needs and channels, and revitalized an ethos among staff that their mission is to serve co-ops.

The award “affirms what we’re doing as a team more than as a recognition of me personally,” said Arnold, who also credits his boss, Chris Perry, Kentucky Electric Cooperatives president and CEO, “for prioritizing communications in the first place, allowing me to invest in the talent and professionals to do their jobs and empowering me to make changes.”

During his tenure at Kentucky Electric Cooperatives, Arnold and his team rolled out several “innovations,” including a revamped “Best of Kentucky” contest in its magazine and Rural Power Kentucky, a grassroots campaign. Along the way, they leveraged several NRECA communications tools, including the Young Adult Member Engagement initiative.

A strong emphasis on collaboration was critical for success, said Arnold. “I am absolutely most proud of the service mentality of our team, the fact that we are responsive to co-op needs. And we try to emulate the way the co-ops are responsive to their members’ needs.

LaBerge Award judges noted Arnold’s collaborative style as “a great example of the cooperative principles that guide what we do. I know the communicators he serves benefit from his expertise and leadership.”

In addition, wrote another judge, Arnold’s skill as a broadcast journalist and attention to detail helped raise the profile of Kentucky co-ops as “thought leaders and a valued source of information to their members.”

Arnold, who knew little about co-ops before Kentucky Electric Cooperatives (“I have the passion of a convert,” he said), is modest. “It’s not a matter of ‘see what I did, to serve the co-ops.’ We are blessed with talented communicators who are willing to learn and understand members’ needs.”

by Victoria A. Rocha, NRECA