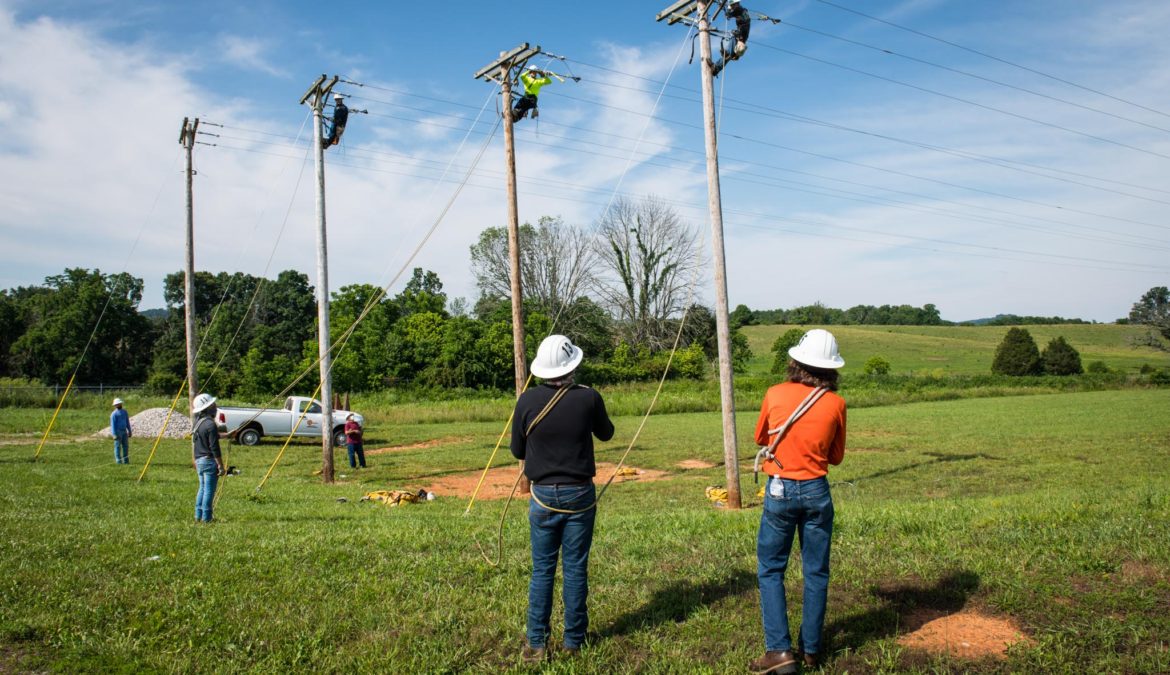 Co-ops and state tech schools team up with line technician training centers
When the sun rises on Coin Road in Pulaski County, most of the time you can hear an unusual sound: the popping of steel-toe boots from students climbing poles at the Somerset Community College Lineman Training Center.

Early one morning, teachers at the center watched patiently as nine young men quickly moved up the poles. With one week to go in their eight weeks of training, four already had jobs at electric co-ops or other companies that continue replacing a generation of line technicians moving into retirement.

Kentucky’s Touchstone Energy Cooperatives and the Kentucky Community & Technical College System (KCTCS) worked hard to launch the program in partnership with other utilities and contractor companies. By all counts, the program has been a phenomenal success.

“The teachers are great and make you feel right at home,” says Marcus Anderson, 19, from Campbellsville. “It’s great facilities with amazing people.”

Most of the KCTCS’s nearly 1,200 line technician graduates have come from the Somerset Community College program, and around 600 more have graduated from KCTCS colleges based in Ashland, Madisonville, Maysville, Prestonsburg and Hazard. Programs vary from five to 16 weeks, but all are achieving the same positive results. About 1,000 graduates from the Somerset program alone are working as line technicians today.

“We stay in touch, and most are now married,” Rhodes says. “That’s 2,000 lives we have impacted. And it just multiplies and multiplies. It’s so gratifying when they come up and just say, ‘Thank you for what you did, and what you taught me.’”

In addition to its outdoor training grounds, the Somerset center includes a 26,000-square-foot building equipped with an indoor climbing yard with 40-foot-tall poles and adjacent classrooms. It’s one of the largest indoor training facilities in the nation, enabling training to continue regardless of weather.

It’s not just students out of high school who attend. In one class, almost half were out-of-work coal miners. Many graduates have overcome other challenges. One young woman showed she could meet the physical demands of line work, while some have dealt with economic hardships.

“One young man slept in his car in the parking lot. He didn’t have the money for a motel or gas money to drive home and he was too proud to tell us,” Rhodes says. “We found out and took care of him. He was employed straight out of the program, and was doing very well last time I checked.”

The vital role of co-ops

South Kentucky RECC played a key role in launching the Somerset Community College program by securing a federal Rural Economic Development Loan for construction. The co-op continues to take care of students by stocking the kitchen and providing much additional support.

Jackson Energy CEO Carol Wright, who previously worked at South Kentucky RECC, was instrumental in launching the Somerset center and continues supporting it in numerous ways. If equipment needs mechanical repairs, Sandy “Shorty” McDaniel, one of Jackson Energy’s auto-truck technicians, is always ready to assist. Tables, desks and cabinets have often been donated after visits by co-op employees who saw a need and wanted to help.

“If I need any maintenance or repairs for equipment, I can call Jackson Energy or South Kentucky, and they will take care of it,” Rhodes says. “East Kentucky Power always does our first aid/CPR class.”

After Big Sandy RECC CEO Bruce Aaron Davis suggested that a line worker program be relaunched in Johnson County, Big Sandy Community & Technical College worked with the co-op and other utilities to get the program started there. In October, 14 students graduated.

Rachelle Burchett, director of the Big Sandy college program, says the effort illustrates how outstanding results can happen when people work together.

“You know RECC’s slogan, Our Power is Our People,” she says. “In our community, our power is in our people and being able to collaborate to make a difference in eastern Kentucky.”

Several co-ops offer tuition scholarships for their members who attend. At the Somerset Lineman Training Center, these scholarships cover the $4,200 cost of the program.

“I can’t thank the co-ops and everyone else involved enough for what they have done,” Rhodes says. “It’s been a success because of the collaboration of all the co-ops, the utility industry and the contractors. They came in and backed this program. It’s nothing that I or anyone else did individually.”

One of the key reasons the KCTCS colleges have been successful in placing graduates is because a wave of line technicians are retiring.

This also has increased the demand and compensation for line technicians. In Kentucky, the median line technician salary is $74,304, according to salary.com.

“The people who laid the groundwork for this, the whole idea was to replace people who are retiring,” Rhodes says. “That hasn’t slowed down since we started.”

Paul Czarapata, KCTCS interim president, says that’s why the mission of the community colleges has never been so important.

“Like many of our courses, the lineman training program has transformed lives,” he says. “We haven’t just helped the graduates find jobs. We’ve launched careers that support many families.”

Dan Newberry, 74, a longtime instructor in Somerset, says he enjoys passing along skills from 31 years of working as a line technician to a new generation and watching the students become successful in good jobs.

“You want them to have a good chance in life,” he says.

Tanner Blair, a 20-year-old from Oil Springs who graduated from Big Sandy Community & Technical College, says the program is enabling him to work in his dream career.

“Every instructor taught the importance of safety on the job and how to be successful,” he says. “I am very thankful for the opportunity provided by BSCTC and recommend anyone interested in the lineman career field to pursue it.”

Ethan Gooch, 19, a student from Richmond, likes the job security and many other aspects of a line technician’s career.

“I love it. I like being outside and way up high,” he says. “I’m willing to travel. It’s fun. You can make a good living, and you always have a job.”