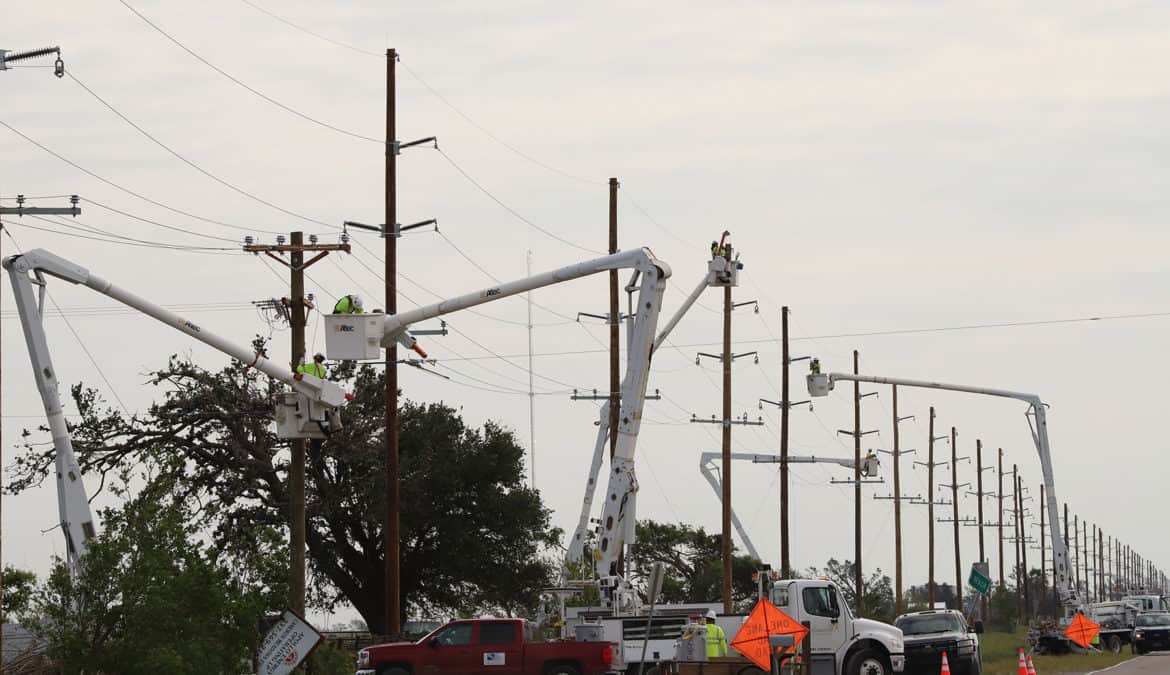 Louisiana’s electric cooperatives were still recovering from the devastation of Hurricane Laura when Hurricane Delta slammed into the state on Oct. 9, dealing another blow to co-op members already coping with damaged or destroyed homes.

Once again, Jeff Davis Electric Cooperative in Jennings and Beauregard Electric Cooperative Inc. in Deridder were hit hardest, losing 100% power for the second time in about six weeks. But, with help from hundreds of co-op lineworkers from a dozen other states organized by the Association of Louisiana Electric Cooperatives, they restored power to many of their consumer-members in less than a week.

“Electricity is life,” said Mike Heinen, general manager of Jeff Davis EC, a small co-op with 11,000 meters and 49 employees. “No matter how exhausted we all are, you can’t say ‘no, I’m not going to do it today.’ If we don’t do our jobs, our members can’t get back up.”

During Laura, about 4,000 of Beauregard’s power poles were knocked to the ground. In contrast, Delta brought down only about 50. However, Delta soaked parts of the service territory with 10 to 17 inches of water, requiring the co-op to use airboats and off-road vehicles to reach flooded areas where repairs were needed, Turner said.

“That slowed us down some,” he said. “It’s taken a few days longer this time to get the water to drain all out.”

Heinen estimates his co-op will be putting its system back together through December. Jeff Davis EC lost nearly 100 miles of transmission line during Laura and had just started rebuilding it when Delta hit. Fortunately, the rebuilt lines survived the second hurricane, he said.

“The most important thing is that nobody got hurt,” Heinen said. “Everything else can be replaced.”

Each co-op has had help from about 700 lineworkers who rushed in from co-ops in other states to help their Louisiana colleagues restore power after Delta. After Laura, about 1,200 out-of-state lineworkers came to help Beauregard EC and about 750 came to help Jeff Davis EC.

“You cannot do it without help from your brother and sister co-ops,” Heinen said. “Not this time. Not this big.”

But welcoming the out-of-state crews has been more complicated this year because of the COVID-19 pandemic, Turner said.

“It’s like working with one hand tied behind your back with COVID,” he said.

More tents were required for visiting lineworkers to ensure social distancing—only 300 people could be housed in tents meant for 600. The co-op also had to find parking places for up to 1,200 trucks instead of 400 during Laura because crew members can’t ride in the same truck.

“You’ve got to fuel all those extra bucket trucks and diggers,” Turner said. “And fuel was already in short supply during the storm.”

Local co-op employees put in 16-hour days getting things ready for the visiting crews and working with them to restore power. A total of 18 employees from both co-ops lost their homes in Laura or Delta.

“But they all showed up here the next day,” Turner said. “It’s kind of in everybody’s DNA around here to keep working ‘til we get the power back on.”

Heinen said a young lineworker came to him one evening, tired after a day spent restoring power to a substation.

“When the lights came on, a family came out on their porch and cheered and thanked him,” he said. “That lineworker told me, ‘Now I know why I’m here.’”

In some cases, the crews are restoring lines to empty lots where homes have been flattened by the hurricanes, Heinen said.