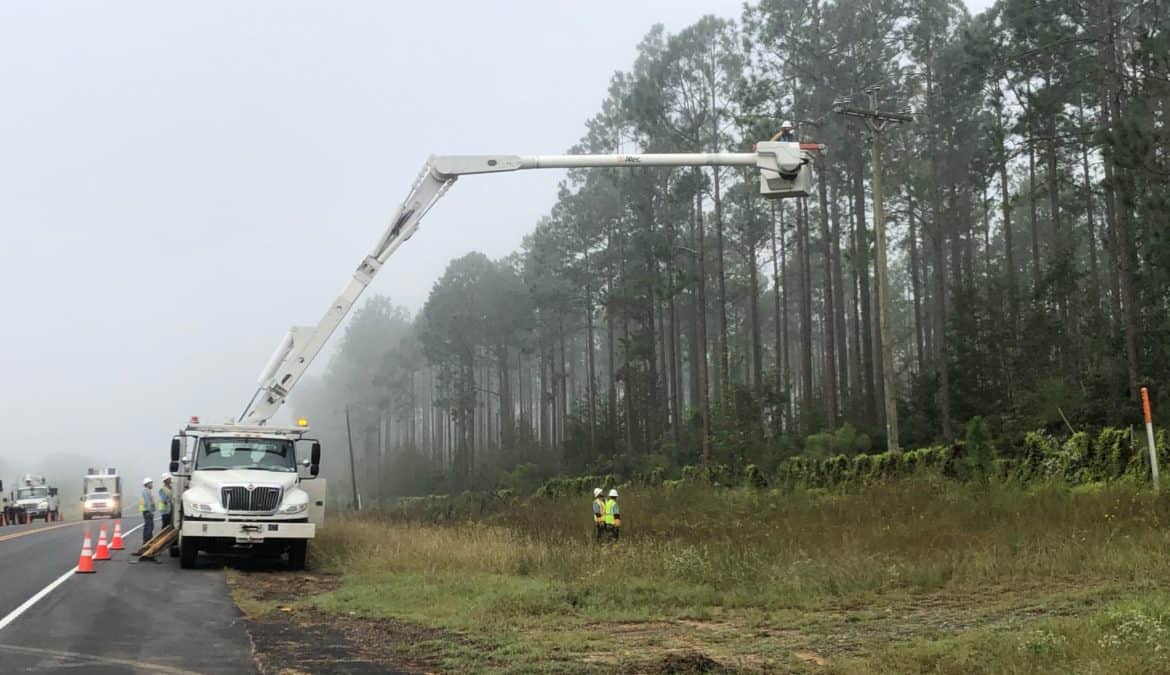 Electric cooperatives in Louisiana and Mississippi made dramatic progress by Tuesday in restoring power after Hurricane Delta slammed into portions of the Gulf Coast that are still recovering from Hurricane Laura.

More than 120,000 people remained without power Tuesday in Louisiana, Mississippi and Texas, down from more than 800,000 on Saturday. That included about 55,000 co-op consumer-members in Louisiana and Mississippi, down from a high of more than 250,000. Two east Texas co-ops affected by Delta have completed restoration.

Delta made landfall near Creole, Louisiana, about 6 p.m. Central time Friday as a Category 2 hurricane, with winds of up to 100 miles per hour. Louisiana co-ops, still repairing damage from Laura, were hit hardest by Delta as it caused fallen wires, damaged poles and severe flooding. The four Louisiana co-ops still recovering from Delta reported about 46,500 meters without power Tuesday. They had more than four times that many outages on Saturday.

“Hurricane Delta came ashore in already storm-torn southwest Louisiana and moved northeastward through the state, causing damage to all our ALEC member electric cooperatives’ systems,” said Jeff Arnold, CEO of the statewide association. “The Association of Louisiana Electric Cooperatives (ALEC) has once again initialized our mutual-aid network to recruit help from lineworkers from other states to assist in the recovery.”

Beauregard Electric Cooperative Inc. in Deridder and Jeff Davis Electric Co-op in Jennings both lost power to 100% of their meters, just as they did when Laura struck about six weeks ago—affecting 42,800 meters for Beauregard EC and 11,000 for Jeff Davis EC.

By Tuesday morning, Beauregard EC had restored power to 45% of its system and expected to reach 50% by the end of the day, said General Manager Kevin Turner.

“It still seems hard to believe that we have been hit with two major hurricanes in a matter of weeks,” Turner said. “Even though we are dealing with the residual effects of Delta’s rains, in terms of high water and flooded areas, I think we are making great strides in restoring our members quickly. I’m really proud of all the hard work of all of our employees.”

Jeff Davis EC was able to begin restoring power Monday after ramping up manpower from out-of-state co-op crews. The co-op now has more than 700 visiting lineworkers helping them, the same number that came in after Laura hit.

“Today we were able to reach a significant milestone restoring power once again to some consumer-members,” Jeff Davis EC General Manager Mike Heinen said in a press release Monday night. He said the co-op was able to restore nearly 1,300 meters.

“We had to send our additional line crews, from Hurricane Laura, home to keep them out of harm’s way prior to Hurricane Delta,” Heinen said. “However, they have been traveling from their home states to return and continue to help us in our restoration and reconstruction efforts. I’m incredibly grateful for all the extra help we have received.”

Jeff Davis EC and Beauregard EC, with help from other co-op crews throughout the country, were just wrapping up restoration work from Laura when Delta hit.

“Prior to Hurricane Delta making landfall, we had restored power to approximately 75% of our consumer-members,” Heinen said. “Everyone is storm battered and weary, but as soon as the winds subsided, we got back to work assessing the most recent damages. Our consumer-members and employees understand they live in a hurricane prone region, and they are resilient. They will just pick up where they left off and continue the charge.”

In a bit of good news, both Jeff Davis EC and Beauregard EC reported that their systems suffered less overall damage from Delta than from Laura. Beauregard re-energized three of its substations by Sunday and expects to re-energize the rest by Wednesday. New transmission lines and structures that Jeff Davis erected after Laura survived Delta.

“If there is a silver lining to an area getting hit with two hurricanes within a number of weeks, it is that Hurricane Delta did not inflict the same level of devastation to our distribution infrastructure,” said Turner, who expects full power to be restored at Beauregard EC within two weeks. “In Laura, miles and miles of three-phase distribution lines were destroyed. After Delta, many of those lines and poles are still standing.”

More than 100,000 members of Southwest Louisiana Electric Membership Corp. in Lafayette lost power Friday night, but that number had been reduced to 20,745 by Tuesday morning.

“Crews are continuing to work in all areas,” SLEMCO said on its website. “We have hundreds of contract crew members from several different states working side-by-side with our own crews in damage assessment, power restoration and right-of-way tree trimming. Crews are still working on feeders today and beginning to work on smaller outages in some areas, too.”

Dixie Electric Membership Corp. in Baton Rouge told its members Sunday that Delta “has been one of the worst weather events to impact the DEMCO system” since the 2016 flood in the wake of Hurricane Gustav. Early Saturday morning, there were nearly 42,000 meters without power. As of Tuesday morning, co-op crews had slashed that number to 2,092 after welcoming help from Alabama and Florida co-ops. Eight Florida co-ops have sent 55 lineworkers to assist DEMCO, said Alisia Hounshell, director of communications and statewide services at Florida Electric Cooperative Association.

“We will do everything we can to safely restore power to every meter as quickly as possible,” DEMCO CEO and General Manager Randy Pierce wrote in a message to members.

Claiborne Electric Cooperative in Homer finished restoring power Tuesday to all but of a handful of meters after initially sustaining outages to 21% of its system, or 5,000 meters.

In Mississippi, only one of the four co-ops damaged by Delta still had power outages Tuesday. Southwest Mississippi Electric Power Association in Lorman reported 7,937 meters without power, or 31% of its system. On Saturday, four of the state’s co-ops had a total of 50,000 meters without power, but other Mississippi co-ops rushed in to help their hard-hit colleagues, bringing outage numbers down quickly, said Ron Stewart, senior vice president of communications at the Electric Cooperatives of Mississippi.

“We have restored 50% of our system in three days,” Southwest Electric said in a press release. “We have 194 lineworkers spread out across our nine-county service area repairing damage. So far, we have found over 150 broken poles and cross-arms. That is MORE than we had after Hurricane Katrina. The damage is systemwide. Our lineworkers, the contractors and the crews from the seven sister cooperatives are working as fast as possible while keeping the safety of themselves and the public in mind.”