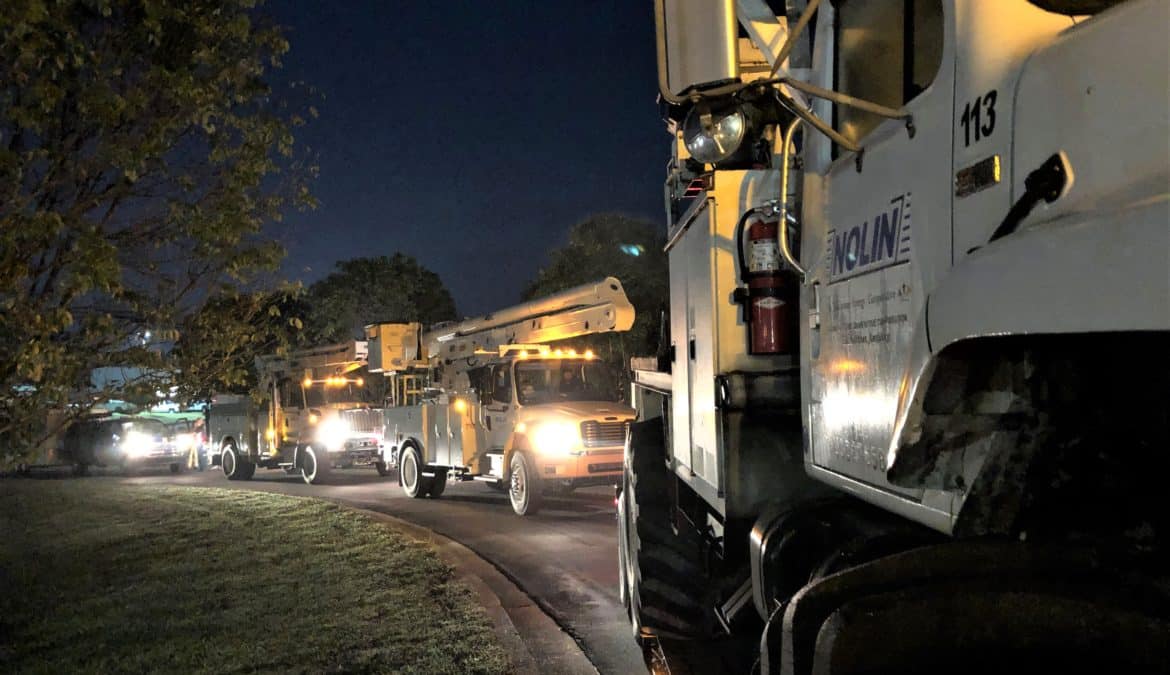 LOUISVILLE, Ky. (September 17, 2020) – In response to a request from an electric cooperative in Alabama, 85 electric co-op employees from Kentucky are joining power restoration efforts after Hurricane Sally hammered the Gulf Coast on Wednesday.

The Category 2 hurricane made landfall early Wednesday in Gulf Shores, Alabama. Moving inland at only about 3 miles per hour, the storm has caused massive flooding and has knocked out power to more than a half-million homes and businesses in Alabama, Florida and Louisiana. Kentucky co-op crews will help restore power to Baldwin EMC, a co-op that serves the area between Mobile, Alabama, and Pensacola, Florida, and includes Gulf Shores and Orange Beach.

More than 78,000 consumer-members of the co-op have lost electric service as a result of the storm. The figure represents 97 percent of the cooperative’s meters. Baldwin has requested at least 1,600 co-op crewmembers to help in the effort.

“Power restoration efforts will begin just as soon as conditions are safe,” said Mark Ingram, Baldwin EMC vice president of corporate services and public relations. He explained that Sally’s strong winds and heavy rains have damaged power lines and equipment. Reports of downed trees and power lines with numerous power poles broken are coming in from across the Baldwin service area. There was also damage to some transmission lines that feed power to the substations and equipment in some locations is under water.

In addition to co-op employees, Kentucky co-ops have already released dozens of construction and right-of-way contract crews to respond to Hurricane Sally, and in recent weeks to Hurricane Laura in Louisiana. Through a careful coordination of mutual aid from co-ops across the Midwest and Southeast, co-op crews are assigned to specific co-ops in need of assistance. On daily conference calls, safety teams from each state assess optimal deployments.

Photos and video of Kentucky electric cooperative crews gearing up and deploying on Thursday, September 17, 2020 are available at this link.

“Any hurricane response presents long hours in challenging conditions, and the flooding being experienced in Alabama adds yet another complication,” said Chris Perry, President and CEO of Kentucky Electric Cooperatives. “By responding to natural disasters in other states, Kentucky co-op crews gain invaluable experience to help them respond to outages here at home. We are praying for the safety of co-op crews and the people they are helping.”

In addition, United Utility Supply Cooperative is responding to Hurricane Sally needs. The Kentucky-based co-op has implemented its storm emergency plan, providing round-the-clock support to meet the material needs of co-ops. Prior to Sally making landfall, UUS sent supplies to electric co-ops in the storm’s path and ordered additional storm emergency material from manufacturers. A UUS warehouse in Prattville, Alabama is fully staffed and responding as co-ops assess the damage.