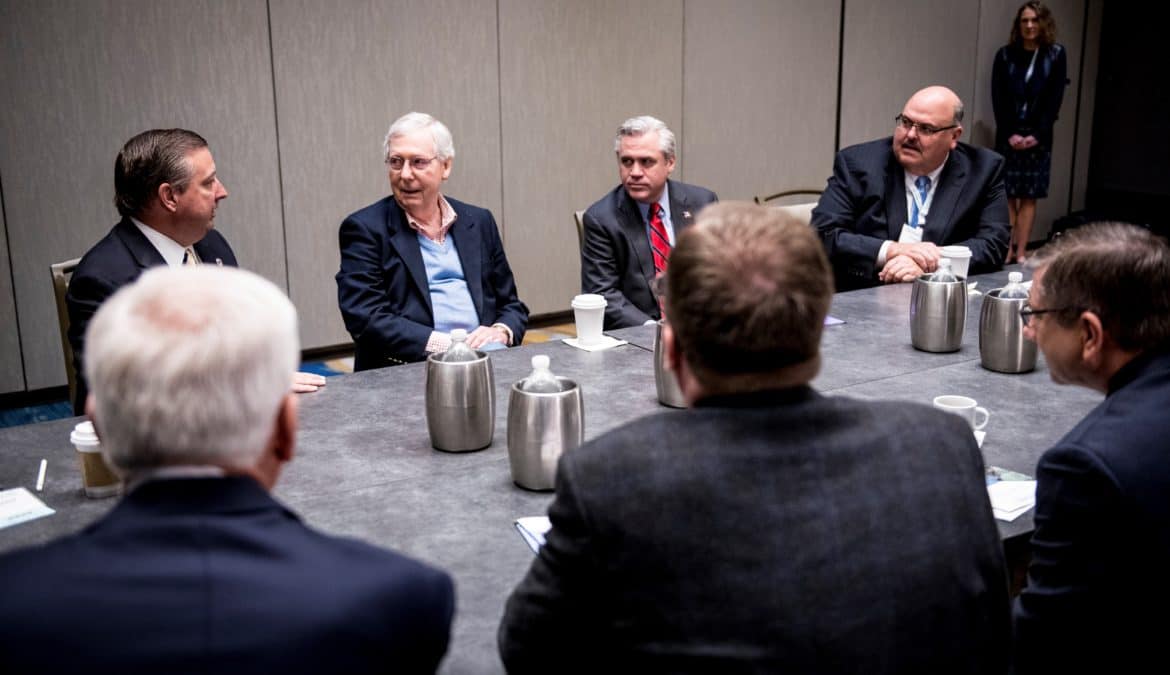 The United States House of Representatives on Tuesday passed the RURAL Act, protecting more than 900 electric cooperatives throughout the nation from the risk of losing their tax-exempt status when they accept government grants for disaster relief, broadband service and other programs that benefit co-op members.

The Senate is poised to pass the bill later this week, and President Trump is expected to sign it into law.

In addition, Kentucky’s co-ops have been encouraged by the support of Senate Majority Leader Mitch McConnell of Kentucky on the issue. McConnell listened to the concerns of co-op leaders at the Kentucky Electric Cooperatives Annual Meeting in November.

“We appreciate the members of Kentucky’s congressional delegation who listened to our concerns and are standing up for the local consumer-members of Kentucky co-ops,” said Chris Perry, president and CEO of Kentucky Electric Cooperatives.  The statewide association represents 26 co-ops in Kentucky.

“The overwhelming support of the RURAL Act, despite what congressional observers considered its unlikely passage, also speaks to the strength of the electric cooperative program when local consumer-members speak with one voice,” Perry continued. “The passage of this legislation is an affirmation of cooperative principles. We are all in this together.”

The RURAL Act is the National Rural Electric Cooperative Association’s top legislative priority for the year because of the profound threat to the business model of not-for-profit co-ops. Tens of thousands of co-op leaders, employees and members across the country rallied to advocate passage of the bill.

“This package preserves the fundamental nature of the electric cooperative business model and will save electric co-ops tens of millions of dollars each year,” said NRECA CEO Jim Matheson. “Moreover, it protects co-op members from unfair increases in their electric rates and provides certainty to co-ops that leverage federal and state grants for economic development, storm recovery and rural broadband deployment.”

Lawmakers passed the popular bipartisan legislation in the final hours of the 2019 session as part of a larger tax and spending bill that funds the government through September 2020.

The bill’s passage fixes a problem created in 2017 when Congress passed the Tax Cuts and Jobs Act, which redefined government grants to co-ops as income rather than capital. That change made it difficult for many co-ops to abide by the 15% limit on non-member income to keep their tax-exempt status. The RURAL Act once again exempts grants from being counted as income and is retroactive to the 2018 tax year.

Without the fix, some co-ops would have had to start paying taxes this spring after receiving grants in 2018 or 2019 to repair storm damage, bring high-speed internet to rural communities or invest in renewable energy and energy-efficiency programs. Many co-op leaders feared they would have to raise rates for members to pay the new taxes.

The legislation attracted more than 300 co-sponsors in the 435-member House and more than half of the senators. The effort was led in the House by Reps. Terri Sewell, D-Ala., and Adrian Smith, R-Neb., and in the Senate by Rob Portman, R-Ohio, and Tina Smith, D-Minn.

NRECA lobbyist Paul Gutierrez credited the victory to a collaborative campaign strategy that included co-ops’ grassroots efforts to alert their senators and representatives to the issue.

“This was an amazing NRECA team and membership effort, including co-op members at the end of the line,” he said. “We had great legislative champions in the House and Senate, and they worked tirelessly to get this included in the final tax package.”