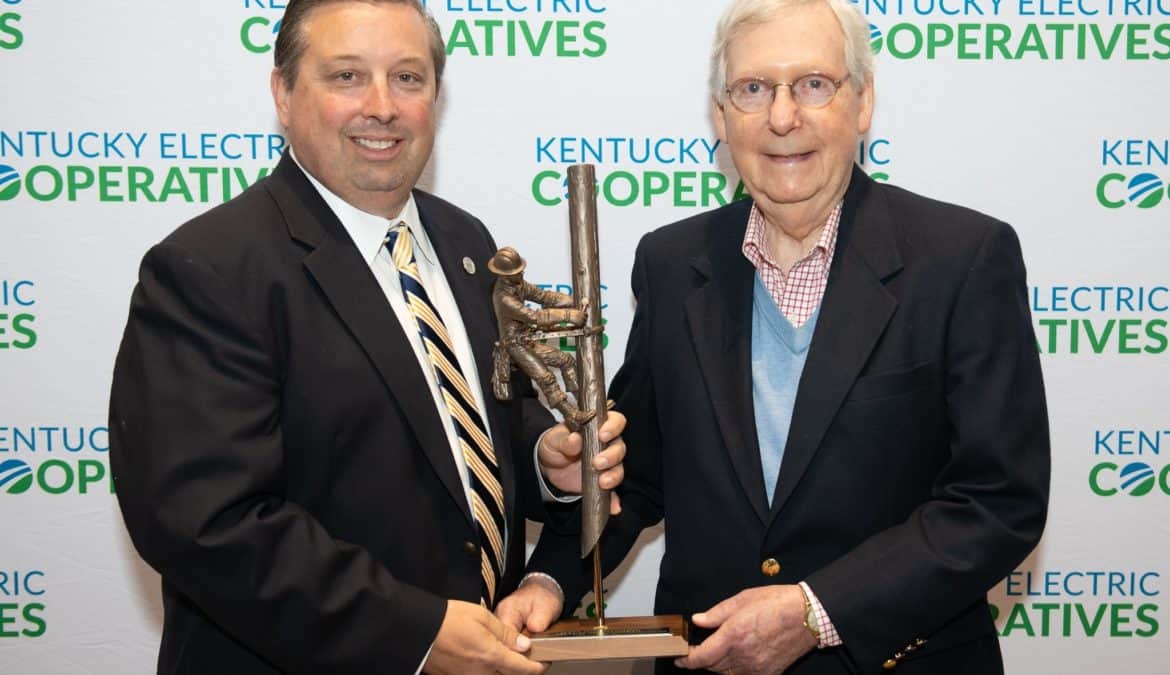 LOUISVILLE, Ky. (November 18, 2019) – U.S. Senate Majority Leader Mitch McConnell (R-KY) was honored on Monday, November 18 as the “2019 Distinguished Rural Kentuckian” at the 73rd Annual Meeting of Kentucky Electric Cooperatives. The award is the highest honor given by the statewide association of Kentucky’s electric cooperatives which serve nearly 1.5 million Kentuckians in 117 of 120 Kentucky counties.

“Senator McConnell is a champion for rural Kentucky,” said Chris Perry, president and CEO of Kentucky Electric Cooperatives. “Time and time again, he has been there for co-ops when it matters most. And, what’s striking is how responsive he is to the issues of rural Kentucky and America.”

“We know that Leader McConnell’s clout means good things for Kentucky and we appreciate his hard work and dedication to fight for rural priorities,” Perry continued. “As Majority Leader, he gets to set the agenda and because of that, rural Kentuckians have a lot to be grateful for. Our agenda is his agenda.”

“As a predominantly rural state, we’re made stronger by our heritage,” said U.S. Senate Majority Leader McConnell. “From the Big Rivers to East Kentucky Power, your 26 statewide electrical cooperatives are making a real difference in the lives of families and communities. You’re helping power Kentucky’s future, support good jobs, and drive our economic prosperity. I’m grateful for your advocacy and keeping me up to date on your priorities, and I’m honored to receive this award.”

First elected to the U.S. Senate in 1984, Senator McConnell is Kentucky’s longest serving senator and the longest serving Republican Senate Leader in U.S. history. In addition to serving on the Senate Agriculture Committee, Senate Rules and Administration, he also serves on the Senate Appropriations Committee – the committee which holds jurisdiction over discretionary spending.

Through the years, Senator McConnell has fought for many priorities important to rural Kentucky, including major tax reform, regulatory relief, infrastructure, rural broadband development and healthcare. Senator McConnell is well-known as a champion for rural Kentuckians – their jobs, families and futures. He has secured vital funding for our communities and been the voice for all Kentuckians in Washington.