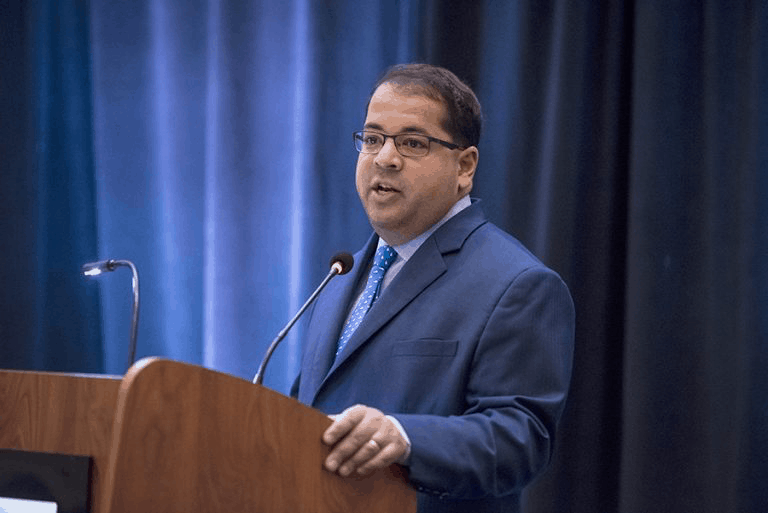 As a high school student in Lexington, Kentucky, Neil Chatterjee learned about rural electrification from the passenger seat.

His girlfriend’s grandfather, Robert “Bob” Sowders, would drive Neil and Rebecca across Kentucky’s backroads, territory Sowders served during his 41 years with the Kentucky Association of Electric Cooperatives.

“He would drive us around parts of rural Kentucky and point out communities that not even a generation earlier didn’t have access to a consistent supply of affordable electricity,” Chatterjee recalls during a conversation in his Washington, D.C., office.

Twenty-five years later, Neil and Rebecca are married with three children, and Chatterjee is now in the driver’s seat of U.S. energy policy as chairman of the Federal Energy Regulatory Commission (FERC). Among the Kentucky mementos on his bookshelves is an electric co-op paperweight from Rebecca’s late grandfather. The tiny transformer inside transports Chatterjee to the early energy education that first piqued his curiosity about electricity.

“I just kind of asked him, ‘Hey Grandpa, what is it exactly that you do? What is an electric cooperative?’ And he explained it to me. He explained the significance of rural electrification and what it meant for Kentucky, not just rural Kentucky but all Kentuckians. And that was my introduction to the electricity field. And if you had told me back then that someday I would be working in this capacity, I don’t think I would have believed you.”

Nominated to FERC by President Donald J. Trump, Chatterjee was confirmed by the Senate in 2017. He has served as chairman twice: He served four months in 2017, and was again named chairman on October 24, 2018.

“You have to take the whole country’s perspective into play when you set these policies,” Chatterjee says. “But where you’re from impacts how you view the world and how you navigate these difficult policy issues, and I think my roots in the Bluegrass certainly color the way that I approach things here. And I want folks in Kentucky to know that there are people in Washington who understand the challenges and opportunities that Kentuckians face.”

In the May issue of Kentucky Living, Chatterjee detailed FERC action on energy issues and shared how he traveled with Kentucky Sen. Mitch McConnell to Kentucky communities affected by the closing of coal mines and power plants.

“People don’t have alternative forms of employment. The only value that families have is their homes, and oftentimes they have owned these homes for generations. But their homes lose value because people aren’t willing to move to an area without hope for economic prosperity. That’s really, really difficult for me to swallow,” Chatterjee says.

Though the Federal Power Act does not enable FERC to factor in those considerations in its decision making, Chatterjee hopes to connect energy and technology innovators with potential opportunities in Kentucky.

“Kentuckians are familiar with working in the energy business and a lot of these entrepreneurs in the energy space want to come to Kentucky and do business in Kentucky. And so, perhaps that will be my contribution to helping these communities struggle with this difficult energy transition.”

Chatterjee’s desire to help people is in his DNA. His parents, Sunil and Malaya Chatterjee, are noted cancer researchers who moved to Kentucky from Buffalo, New York, to work at the University of Kentucky’s Markey Cancer Center.

“They brought us down over Thanksgiving break to visit Lexington under the premise that we were going to go to a UK basketball game,” Chatterjee says.

Because fellow Buffalo native Christian Laettner had been his tennis coach, Chatterjee was a Duke University basketball fan. Yet by the time Kentucky won the national championship in 1996, Chatterjee was a member of Big Blue Nation.

“I ran out on the court,” Chatterjee laughs. “I think I jumped on Allen Edwards’ back at some point to try to get closer to the net. It was so fun.”

A graduate of Henry Clay High School in Lexington, Chatterjee says most of his best friends are folks that he met here. “My roots in the Bluegrass run deep.”

Speaking at the Kentucky Governor’s Conference on Energy and the Environment in Lexington earlier this year, Chatterjee saw the faces of fellow Kentuckians and friends. The last time he had been on that hotel ballroom stage he was giving a toast at his wedding reception.

“I still consider myself to be a Kentuckian,” Chatterjee says, crediting Senate Majority Leader McConnell with the propulsion of his energy leadership. After first working on energy issues as an aide to House Republican Conference Chairwoman Deborah Pryce of Ohio, Chatterjee served in government relations for the National Rural Electric Cooperative Association. He then became an energy policy advisor to McConnell, who he says has meant “everything” to his career.

“Starting from just giving me an opportunity, taking a chance on me. Trusting me. What I have learned from him I could write volumes,” Chatterjee says. “His approach to leadership, to policymaking, to governing, he’s just been incredible. And then I think one of the more understated elements of his impact to Kentucky in his career is the fact that not just me, so many Kentuckians have gotten opportunities to serve at high levels of government because of him, because of the opportunities he has given us. And I think, look, it’s good for Kentucky to have people who understand Kentucky in positions where policy decisions are being made.”

And the lessons Chatterjee learned from a Kentucky electric co-op veteran 25 years ago continue to resonate in the FERC hallways today.

“That electricity is the one public policy area that touches literally every single American,” Chatterjee says, “And that we are so blessed in this country to have the sophisticated infrastructure that we do. I would say that the electric grid is probably mankind’s greatest invention. And the U.S. grid is a fascinating thing. It takes a lot of hard work to maintain it, but it’s important. And that’s what Grandpa Sowders taught me.”