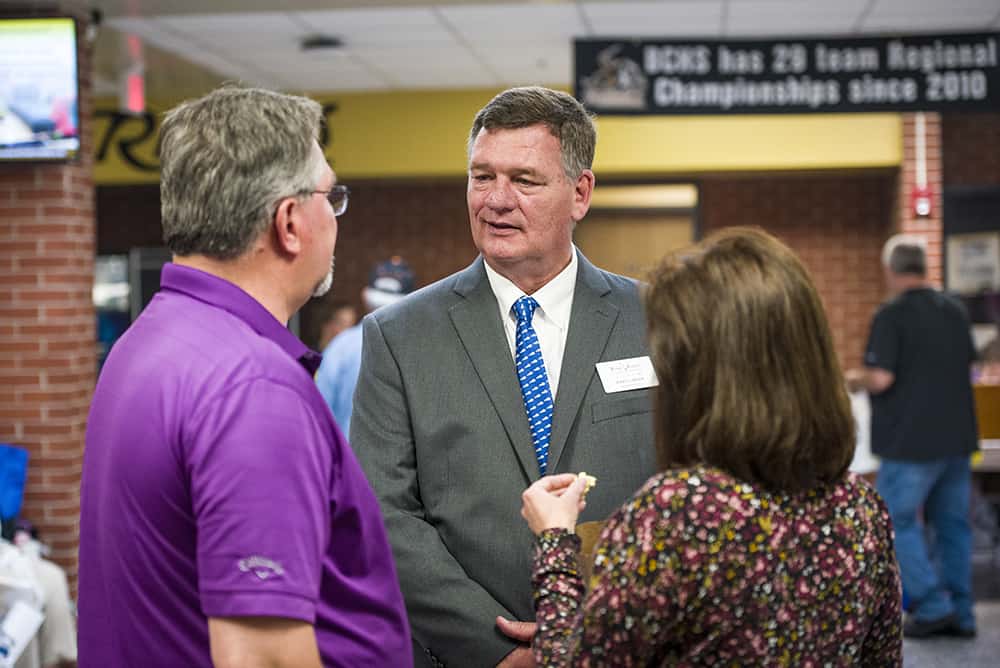 With overcast sky and light rain, members entered beneath the U.S. flag hung between two Inter-County Energy bucket trucks at Boyle County High School, Danville, for the 81st annual meeting, Friday, May 3, 5–7 p.m., with entertainment at 6 p.m. and business meeting at 7 p.m.

Booths lined hallways with about 10 employees registering 413 members, with approximately 1,000 people attending. Members received a bucket with LED bulbs. There was free popcorn and Perryville Christian Church sold drinks and food. Outside people lined up for free homemade ice cream scooped by 4 Generations, Stanford. They watched safety demonstrations and checked out an electric vehicle. Kids received free hard hats and caricature drawings from Denny Whalen and assistant, who were attending Inter-County’s meeting for the first time.

People gathered in the auditorium at 6 p.m. to hear the Zach Shelton and 64 to Grayson band. At 7 p.m., everyone convened in the auditorium, where emcee Thom Whittinghill recognized veterans in the audience. The Marion County High School Junior ROTC presented the colors and Samuel Bullock, Stanford, sang the national anthem.

Spalding called the business meeting to order and Attorney Hadden Dean served as parliamentarian. Spalding confirmed the quorum and also the official notice by reading the proof of mailing. Dean announced the election of Allen Goggin, Boyle District, and J. Kevin Preston, Garrard District, both unopposed. In the third year of absentee ballots, he noted that nine votes were cast April 12-26 at Inter-County and Lebanon offices.

Preston’s financial report referenced the 2018 annual report, which was mailed in Kentucky Living this week. The annual audit showed no deficiencies. Chairman Spalding noted in his report that our power is changing from coal to other sources and renewable energy like Cooperative Solar. Since 2013, he says Inter-County has been fortunate to receive competitive pricing from PJM, which provides wholesale energy to 13 states. This year for the first time, 16 co-ops received $1.8 million in capital credits from East Kentucky Power; Inter-County received $120,000.

Carter began his president/CEO report with a moment of silence in memory of former employee Eugene McCowan, followed by honoring four retirees—Darryl Adams, Kent Loomer, Eugenia Adkins and Robert “Bob” Denny—with 85 years of combined service. Carter reviewed statistics, noting that Inter-County is one of the fastest growing co-ops in Kentucky with $131 million in assets; however, there was an operating loss in 2018 of $1.147 million, primarily due to increased vegetation management, equipment cost and steel construction hardware.

Carter told the audience that for years Inter-County Energy has had higher electric rates than the for-profit IOUs, but he is happy to announce that is no longer the case. Inter-County Energy’s monthly customer charge is less and the meter per kWh cost is the same.

He recognized the co-op’s 63 employees, commending all for going one year, or 118,000 hours, with no loss-time accidents. Carter said that Inter-County shows “Commitment to Community,” with employees who serve on many boards, councils and organizations. Christmas Blessings, which began in 2008, and a silent auction, raised $5,018 last year for children in 13 families. Since 2008, the program has raised $32,000, helping 249 children in 37 families. The co-op is committed to students by giving safety demonstrations, and last year by sending six students on the Washington Youth Tour and providing six others with $1,000 scholarships. Inter-County also is involved in community and economic development.

Carter ended by reminding the audience of the co-op’s mission: to provide long-term, valued electrical energy and services to members through a culture of safety, accountability, innovation, integrity and commitment to community.

The meeting ended with the drawing for six $500 Visa cards for members.