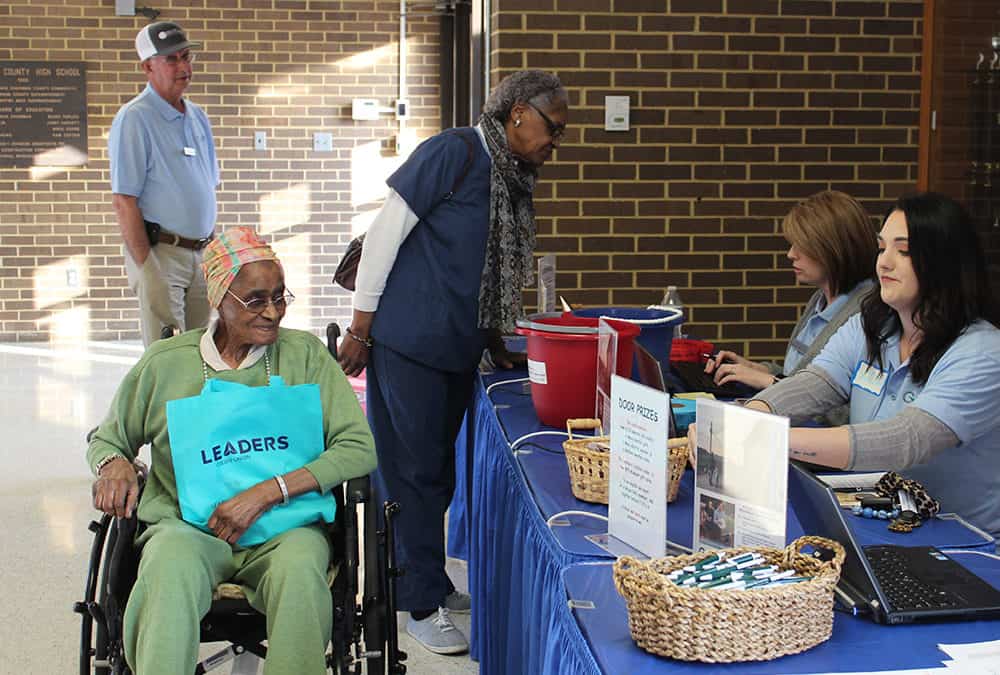 Gibson EMC Board Chairman Steve Sanders opened the business meeting by thanking members for their participation and support. He also talked about the benefits of cooperative membership including local ownership and control through the member elected board of trustees.

Gibson EMC and Gibson Connect President and CEO Dan Rodamaker began his report by stating the cooperative’s mission which is to enhance the co-op members’ quality of life by providing exceptional services that are reliable, affordable and safe. “Service reliability is a high priority for Gibson EMC and our members,” he said.  “Rebuilding the Trenton Substation was a large project we completed in 2018 that was necessary to enhance service reliability for members in and around Trenton,” he explained. “Our 2019-2022 construction work plan includes other significant projects like the construction of a new substation in the south Medina area and the rebuilding of the Alamo substation, along with Phase I and Phase II of the fiber buildout,” Rodamaker said.  “Within this four-year work plan, we also will convert some areas in Kentucky to 25kV to improve service reliability.”

Rodamaker talked about Gibson EMC’s commitment to safety and recognized the Alamo, Hickman, Tiptonville and Trenton employees for working all year without a lost-time injury. “Keeping our members and our employees safe is mission critical,” he said. “This is why we emphasize safety every day with our employees and regularly do safety demonstrations for our schools and civic groups.”

Rodamaker explained that affordability is another major concern for Gibson EMC. “During the three years since we merged with the former Hickman-Fulton Counties Rural Electric Cooperative Corporation, our Kentucky members have saved more than $3 million,” he said. Rodamaker also explained that Gibson EMC uses an outside consultant to conduct a cost-of-service study from time to time to understand the true cost of providing service within each rate class of members and to ensure that the rates are fair and equitable.

Gibson Connect, Gibson EMC’s wholly-owned, not-for-profit subsidiary, uses a web-based participation system to guide the order of its internet buildout. Join.gibsonconnect.com, was launched October 10, 2017, and Medina was the first zone to reach its participation goal. Dyer and Three Way soon followed.  These zones and the area covered by a $1.4 million Tennessee Broadband Accessibility Grant (for Ridgely, Tiptonville and Samburg) are included in Gibson Connect’s fiber-to-the-home buildout. “Our goal is to ultimately provide all of our eligible members with access to high-speed, fiber-based service, but we must use a phased approach and it will take time – probably about five years to complete the buildout,” Rodamaker said.

To help move the project along and hold down costs, Gibson EMC is pursuing grants for those areas that qualify. So far, the co-op has been awarded a $1.4 million Tennessee Broadband Accessibility Grant for Ridgely, Tiptonville and Samburg and $1.22 million in CAF II funding for areas in both Tennessee and Kentucky. This year Gibson EMC applied for two more Tennessee Broadband Accessibility grants, one to serve a section of Obion County and the second to serve parts of Crockett and Gibson counties. Rodamaker said that Gibson EMC will continue to apply for grants and low-interest loans on behalf of its members as it works to provide access to all of its members.

At the meeting Brandon Gibson, Senior Advisor in the Office of the Governor for the State of Tennessee, announced that Gibson EMC had just been awarded a $588,974 grant to serve the Gadsden community in Crockett County and part of Gibson County. “Access for rural broadband is a real issue,” Gibson said. “Electric cooperatives have deep roots in their communities, and in 2017 the Tennessee Broadband Accessibility Act created the infrastructure grant program and permitted electric cooperatives to provide broadband internet access. Earlier this week, the Governor was pleased to announce the round two awardees of the Broadband Accessibility Grant. For this round of grants, we received 59 applications for $15 million in grant funding. The total of these applications was $62 million in requests. Gibson EMC was one of 13 providers across the state whose project was funded in round two,” Gibson said. She explained that Gibson Electric is unique, because it is only one of two providers who have been awarded grant funds in both rounds of the state’s grant process. The first was to put fiber in rural areas of Lake County. “Both grants demonstrate Gibson EMC’s commitment to its rural communities and using all funding sources available to them,” she said.  “The state was very impressed with the buy-in from Gibson EMC customers and the willingness for everybody to sign up and commit to using the services.”

Rodamaker thanked the co-op’s board and employees for their dedicated service and he thanked the co-op’s member-owners for their trust and support. He closed saying, “By helping those who are less fortunate, joining together to recruit jobs to our communities, reinvesting in our electric infrastructure, and building a broadband system to provide an increasingly intelligent electric grid and access to high-speed internet service, Gibson EMC is working every day to provide its member-owners power andopportunity.”