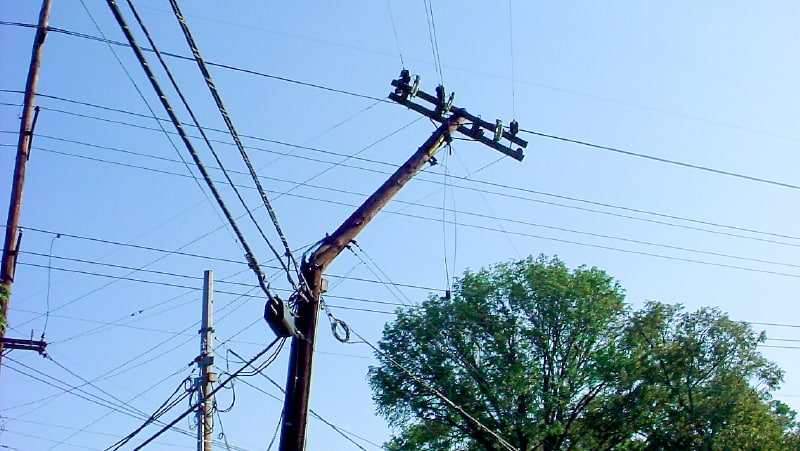 The forecast called for gusty winds, perhaps as high as 45 miles per hour, but by the end of the day, Governor Steve Beshear would declare a state of emergency after that gusty forecast transformed into a blast of hurricane-force winds.

Not including uninsured losses, Kentucky faced $595 million in damages and the largest power outage the commonwealth had ever seen.

It was Sunday, September 14, 2008. The skies were clear with no rain or lightning, not the usual setting for a weather disaster.

Yet, in what the Kentucky Public Service Commission would later describe as an “unprecedented convergence of meteorological events,” the warm air carried by remnants of Hurricane Ike escaped through a break in the clouds, replaced by a rush of air from a colliding cold front.

“This was a unique event, not duplicated anywhere else in the United States,” John Gordon, chief of the National Weather Service office in Louisville, would later say. “It was the most extreme event I have ever seen.”

Sustained winds of more than 50 miles per hour—gusting to 75 miles per hour—and falling trees and limbs wiped out thousands of power lines and poles across the state.

“One of the biggest things I learned from that very storm was to be patient when sending the guys out to restore,” says Brian Jones, operations manager at Owen Electric in northern Kentucky. “We didn’t want our linemen in buckets or on poles due to the long duration of the sustained high winds.”

With more than 28,000 consumer-members affected, Owen Electric was one of several electric cooperatives tasked with widespread outages as Ike made a path along the Ohio River.

“Once the winds had died down, we had a game plan and assessments to start working,” Jones recalls.

The Safety and Loss Prevention team at the Kentucky Association of Electric Cooperatives coordinated the mutual aid response, matching requests for assistance with offers to help from co-ops in Kentucky and surrounding states. In fact, some of the same Virginia co-ops that helped Kentucky in 2008 received help from Kentucky co-ops when a powerful nor’easter struck that state six months ago.

“This is another benefit of cooperation among cooperatives,” says KAEC safety director Clarence Greene. “When disasters strike, we are better prepared to respond because we’ve seen it before.”

When the windstorm struck, 121 lineworkers from 14 Kentucky co-ops were helping restore power in Mississippi. They returned to Kentucky to join restoration efforts here.

“Lineworkers demonstrated their commitment to consumer-members in a very challenging situation,” Sharp says.  The key was being prepared, with proactive maintenance of tree trimming, up-to-date sectionalizing of the system to minimize outages and constant training, Sharp adds.

“It affirmed what we were doing was correct,” Sharp says. “Even though we had catastrophic conditions, damage to the system was limited, and power was restored in two to three days.”

A disaster plan and open lines of communication were instrumental in the ability of United Utility Supply to quickly equip cooperatives with critical materials.

“Once a disaster strikes, we continuously supply our members with material as needed,” UUS Executive Vice President Gary Burnett says. “We meet afterword to evaluate how we met our members’ needs and determine how we need to improve in the future.”

KAEC President and CEO Chris Perry says co-ops learned a lot about themselves from both the windstorm and the devastating ice storm that hit four months later.

“First, our cooperative network across the country is ready and able to send additional line crews to make repairs when needed,” Perry says. “Second, cooperatives must invest in tools and technology to make outage restoration safer and more responsive.”

After the storms, Kentucky co-ops invested in outage management systems that give a clearer picture of where to begin restoration efforts.

“Hours and days have been saved with these systems in place,” Perry explains.

Jones says another key element to Owen Electric’s storm response was a strategic deployment of crews.

“It’s better to hold a crew in the office waiting for information than to send everyone out, then call that crew back in because of the additional information you’ve received,” Jones says.

“Slow and steady is more efficient and safer,” he adds. “Which is what our main objective is to be—safe and reliable.”