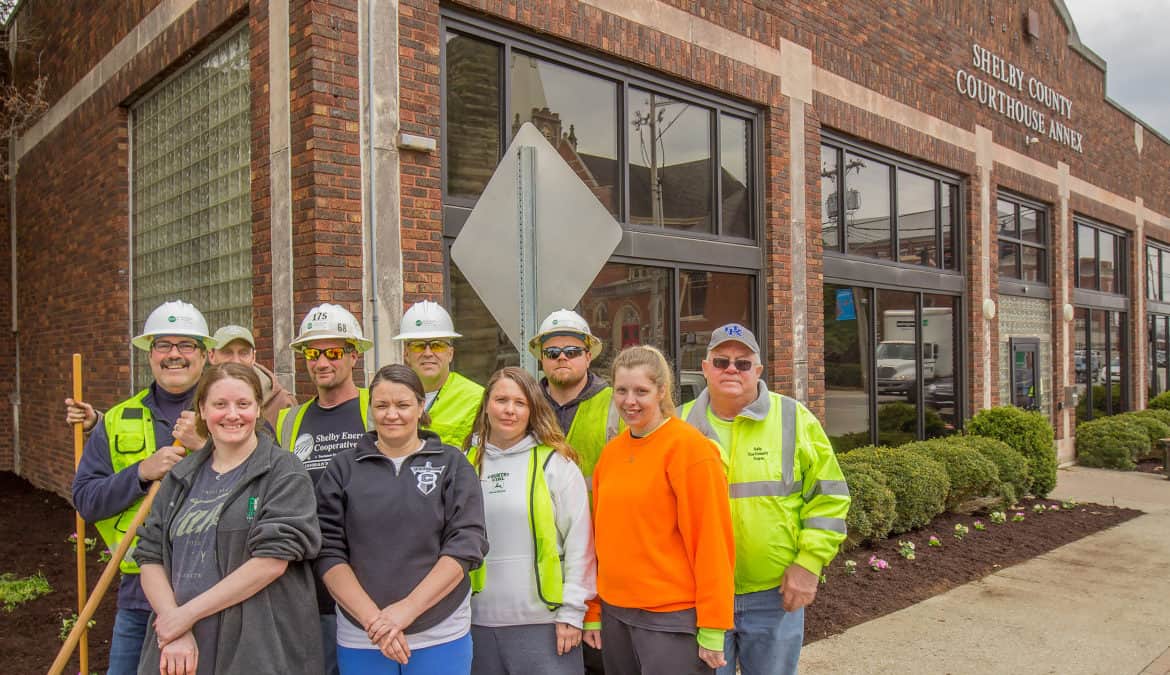 It’s a partnership rooted in a simple goal, to help reveal the beauty of Kentucky.

The Bluegrass State’s natural beauty, from the mountains to river valleys, is well lived in, and sometimes that means her natural beauty needs a little help to shine bright.

That’s why Governor Matt Bevin, in partnership with Kentucky’s electric cooperatives and Kentucky Living, is encouraging Kentuckians to “Beautify the Bluegrass.” The program, in its second year, recognizes homegrown initiatives and clean-up projects as they happen, and culminates with Kentuckians voting for the best projects on KentuckyLiving.com.

“Our goal is for you as community members to identify something in your community that you can be involved in repairing, or enhancing, or beautifying,” says Bevin. “Get together one, two, three, five, fifty, or a hundred. I don’t care, however many people you need to incorporate to take on an area and make it better.”

When Shelby Energy Cooperative heard that the governor and Kentucky’s electric cooperatives were teaming up on Beautify the Bluegrass, co-op employees sprang into action. They volunteered to jumpstart this year’s initiative by sprucing up and landscaping the Shelby County Courthouse Annex area.

“We take pride in the communities we serve,” says Debbie Martin, Shelby Energy Cooperative’s president and CEO. “We’re thrilled to help Governor Bevin launch Beautify the Bluegrass, and we bet other electric co-ops across Kentucky will also roll up their sleeves.”

In aptly named Paintsville, volunteers behind last year’s winning “Beautify the Bluegrass” project say their efforts to improve the appearance of buildings in a downtown park are helping lift a cloud from the community.

“The paint transformed this little area of buildings, but more than that it transformed a spirit,” the Paintsville/Johnson County Trail Town Committee wrote in its entry. “Shame, embarrassment and hopelessness have been replaced with hope, excitement and the wonderful imagining of what we can be.”

As winners of the 2017 Beautify the Bluegrass contest, the Paintsville group was awarded a barbecue lunch with Governor Bevin.

The winners of the 2018 contest will also enjoy a barbecue meal with Governor Bevin and Lt. Governor Jenean Hampton, provided by the Kentucky Association of Electric Cooperatives.

“We love when the governor says, ‘We are Kentucky,” says KAEC President and CEO Chris Perry. “Because, that’s what Kentucky’s electric cooperatives are all about, real Kentuckians who care about their communities. Our mission is to improve the quality of life in Kentucky, and our flagship publication, Kentucky Living, aims to celebrate the energy of Kentucky.”

“We applaud the governor for envisioning Beautify the Bluegrass,” Perry says. “Like our member-owned co-ops, Governor Bevin recognizes the value and values of hometown Kentucky. What better way to improve our quality of life than to make improvements where we live?”

To participate, entrants should take “before and after” photos of their beautification projects and upload them with the entry form on KentuckyLiving.com. Deadline to enter is July 27. A complete list of rules and an official sign to display in your photos are also available on KentuckyLiving.com.

In early August, Kentuckians can choose from among ten nominees on KentuckyLiving.com to determine four finalists. Governor Bevin will announce the Beautify the Bluegrass winner at Kentucky Living’s Best in Kentucky awards at the Kentucky State Fair on August 23.

With the support of Kentucky Living magazine, Kentucky’s most highly circulated publication, the reach of Kentucky’s electric cooperatives which provide service in 117 of Kentucky’s 120 counties, and the passion of Governor Bevin, the partnership aims to inspire Kentuckians to take improvement ideas into their own hands.

“The Beautify the Bluegrass contest provides you with an opportunity to make a powerful difference in your community, wherever you reside in the Commonwealth of Kentucky,” Bevin says.