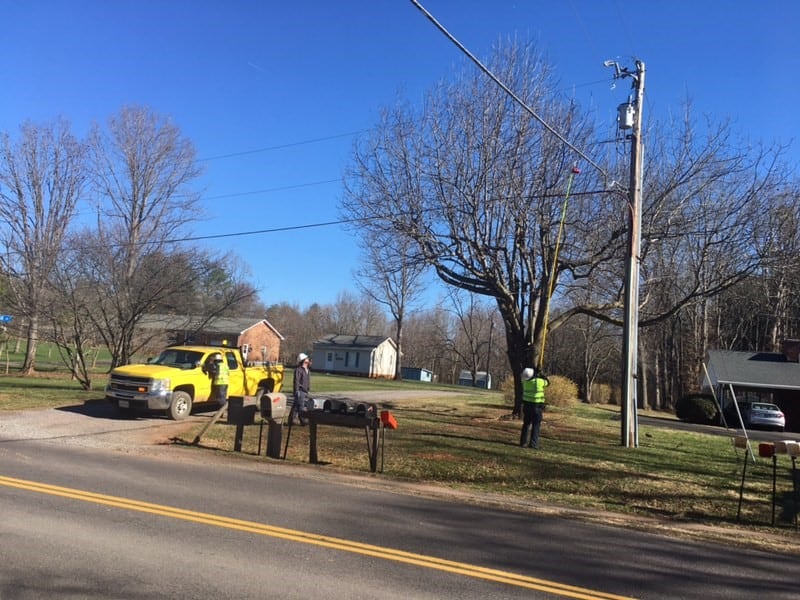 Linemen from Kentucky’s electric cooperatives have played a crucial role in the power restoration efforts in Virginia after a powerful nor’easter last week.

As of Monday morning, more than 50 Kentucky linemen were still on the job, down from more than 70 linemen from 13 Kentucky cooperatives who responded to the mutual aid call on Friday. Several crews are heading home after helping restore power to Northern Neck EC and Shenandoah Valley EC.

Most of the Kentucky line workers continue to assist Rappahannock Electric Cooperative. As of Monday morning, fewer than 8,000 REC members remained without power, down from nearly 50,000 members who had lost service at the peak of the relentless wind storm.

“We appreciate the mutual aid we’ve received from our sister co-ops in Kentucky, South Carolina, North Carolina and Virginia,” said Casey Hollins, Rappahannock EC Director of Communications and Public Relations. “The damage throughout our service territory was extensive. Without the assistance we have received our restoration efforts would have extended far beyond what they are. We know there will come a day when another co-op will need our help, and we will be ready to answer the call.”

In addition, one Kentucky-based crew has been deployed to Northern VA EC (NOVEC) and began work there Monday morning.

More than 800 separate outage events remain, each representing an outage affecting anywhere from 1 to 200 members.

Our crews have to travel to these unique locations and assess the damage, then move forward to restore the members’ power,” said Ron Harris, vice president of engineering and operations for REC. “We will be working around the clock with the REC employees, as well as our mutual aid employees, until all Rappahannock members have their power restored.

Nearly 175 poles have been or will be replaced as a result of the storm. The most severe damage occurred along and east of the Blue Ridge Mountains, where winds were the strongest.

“The damage and conditions are similar to what Kentucky experienced with Ike,” said Clarence Greene, Safety and Loss Prevention Director for the Kentucky Association of Electric Cooperatives.
In September, 2008, the remnants of Hurricane Ike triggered a windstorm that knocked out power to about 600,000 Kentuckians.
Greene said Kentucky linemen are dealing with high winds and cold weather in Virginia, coupled with unfamiliarity with the service territory. “People with power out are grateful and patient getting power restored,” he said
Because the national network of transmission and distribution infrastructure owned by electric cooperatives has been built to federal standards, line crews from any co-op in America can arrive on the scene ready to provide emergency support, secure in their knowledge of the system’s engineering.
“We have always felt that what defines a co-op is reliability and family. In every corner of Kentucky we serve, we know our members and take care of them like family, and that expands to national electric cooperatives in times of need,” KAEC President Chris Perry said. “We are eager to help our co-op families in any way we can.

The top priority of each local Kentucky co-op is service to its own member-owners.  Before committing resources to mutual aid requests, each co-op ensures it has ample crews available for all local needs, including routine maintenance and emergencies.