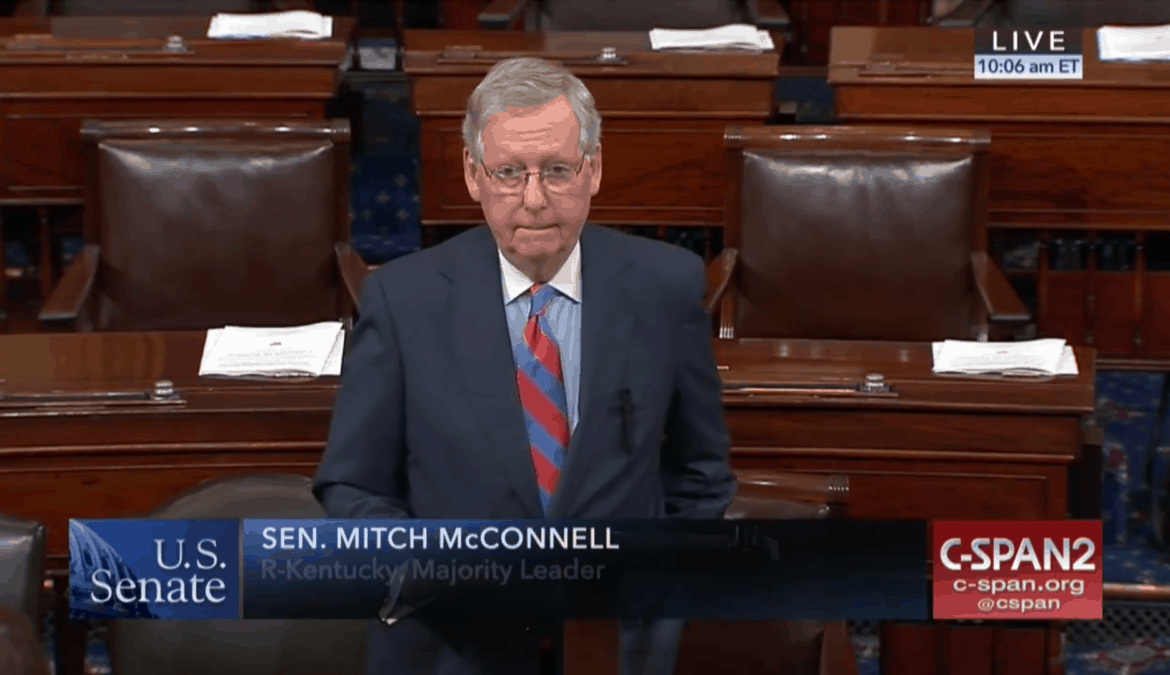 Senate Majority Leader Mitch McConnell (R-KY) made the following remarks on the Senate floor regarding the need for disaster relief for hurricane victims:

“Last week, Congress passed legislation to reauthorize the FAA including its authority to collect and spend money for repairs and replacement parts for our air traffic control system. I am proud that we worked together to get this bill over the finish line. Now the FAA can continue to play a critical role in the federal government’s response to the powerful hurricanes that have hit our country.

“The president is on his way to Puerto Rico to survey the hurricane damage personally and see how the federal government can continue to assist in the recovery efforts. Our thoughts remain with the hurricane victims as they continue to piece their lives and communities back together. During his visit, the president will have the opportunity to see the resilience of the Puerto Rican people. He can also witness the overwhelming support of their fellow Americans who have volunteered to help deliver relief.

“Much of that support has come from the military – including the men and women of Kentucky’s own Air and Army National Guard, who have helped bring relief to Texas, Florida, the Virgin Islands, and Puerto Rico. Just last week, the 101st Airborne Combat Aviation Brigade deployed from Fort Campbell in my home state to help support relief efforts in Puerto Rico.

“President Trump will also have the chance to see the groundswell of generosity from our communities. Many donated money, food, or other essentials. Other brave Americans left their homes behind to go to disaster sites to offer aid. I am especially proud to recognize some of the Kentuckians who have volunteered to join the relief efforts in the wake of these storms.

“The Kentucky Board of Emergency Medical Services selected eight fire departments from around my state to send to Florida to assist local operations after Hurricane Irma. Working 12-hour shifts, these firefighters responded to 9-1-1 calls in Tampa as residents begin to move back into their homes.

“Throughout my state, churches and non-profits sent volunteers to help however they could. One religious organization arranged more than 200 volunteers to help flood victims in Texas and Florida. In all, they served over 78,000 meals, helped with laundry, and distributed many bottles of water.

“The Kentucky Humane Society stepped in to care for pets that were affected, and chapters of the American Red Cross from across the Commonwealth have mobilized to help where needed. The Kentucky Association of Electric Cooperatives sent dozens of linemen to Georgia to help restore power after Hurricane Irma. The joint effort from 17 of our state’s electric cooperatives represents one of the largest mutual deployments in Kentucky history.

“These Kentuckians – along with so many more – have generously given their time and labor to help their fellow Americans during this time of suffering. And they aren’t alone. Compassionate men and women from around the country have joined the cause to help ease the pain of the victims.

“Along with my colleagues in the Senate, I am committed to continuing to do our part to support relief along with FEMA, the Department of Defense, and the rest of the administration. We will soon receive a supplemental funding request from the administration, and when we do I expect Congress will act quickly to ensure that the men and women providing critical support in Puerto Rico and the U.S. Virgin Islands have the resources they need. The Senate will continue to stand with those suffering from these devastating storms.”