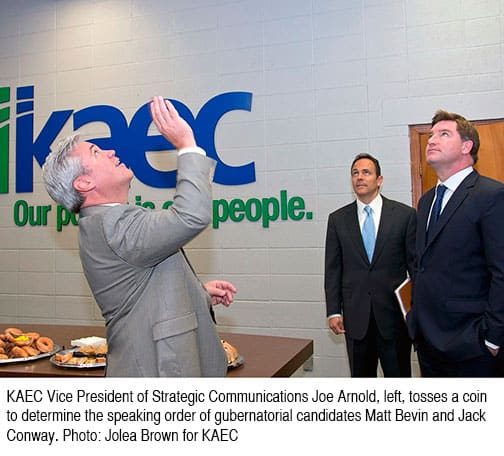 Kentucky voters aren’t the only ones facing a critical decision. The next governor must decide how to confront controversial EPA regulations.

With Kentucky’s future electric rates hanging in the balance, opposing candidates for governor share a common suggestion, that the state’s electricity providers should resist crafting a plan to comply with the stricter than expected final rule of the Environmental Protection Agency’s Clean Power Plan.

“I don’t think you ought to start developing a plan,” Kentucky Attorney General Jack Conway (D) said during a gubernatorial debate before the 52-member board of the Kentucky Association of Electric Cooperatives (KAEC) in Louisville.

“I would instruct you not to comply,” agreed businessman Matt Bevin (R). “Because, as a state, we will not comply. As governor, I will not submit that plan, and I will have your back on that.”

At the September 22 debate, both Bevin and Conway recognized the importance of Kentucky’s electric cooperatives in the lives of the approximately 1.7 million people they serve, stressing the legacy of reliable and affordable electricity, especially in rural areas dealing with poor economic conditions.

The EPA’s final rule to limit carbon emissions across the United States shocked Kentucky energy officials when it was announced in August because it requires a much steeper reduction of CO2 emissions than the original plan.

“The new limits in the plan are impossible to achieve with our current fleet of generators,” says KAEC President and CEO Chris Perry. “The time frame is inconsistent with time needed to build alternative sources. This makes the potential great for increased costs and potential reliability problems.”

(View all segments of the KAEC Gubernatorial Debate)

MAJOR DECISION
How Kentucky chooses to react to the EPA mandate is one of the first major decisions facing the next governor of Kentucky, who will take office on December 8.

If a state fails to file a state implementation plan, it becomes subject to a federal implementation plan. Losing control of implementation is a concern to power generating cooperatives, such as East Kentucky Power Cooperative (EKPC) in Winchester. During the debate, EKPC President and CEO Tony Campbell reminded the candidates of what’s at stake in the EPA debate.

“I think it is conceivable that we could see a doubling of rates” by 2030, Campbell told the candidates, “especially with natural gas prices moving upward. Are you going to put an order out for us not to comply? Because we’re going to have to comply with one or the other if it’s a federal law.”

“We do not need to comply with the regulatory suggestions from unelected bodies,” Bevin says. “There is no legally binding mandate, none whatsoever, from the EPA that forces us as a state or you ultimately as individual cooperatives to comply, and I will have your back on that.”

Conway has sued the EPA as Kentucky’s attorney general, but a federal appeals court rejected Kentucky’s request for a preliminary injunction against the Clean Power Plan because the final rule has not yet been published in the Federal Register.

“The D.C. Circuit (Court), I think, is very sympathetic to our arguments,” Conway says. “So as soon as that thing is published, I as attorney general or I as governor, will sue, along with other states, to get an injunction in place, to stay the implementation of that, pending the outcome on the merits of this case.”

“It is wise to have that plan as an option,” Campbell says. “Ultimately, it will be up to the governor’s administration to decide whether to submit that plan.”

“I would tell you, no, do not begin planning for that,” Conway says, “because I think we’re going to win this case. I think it’s pretty clear that the Environmental Protection Agency hasn’t followed its own governing statutes. I mean, they are reregulating carbon several times under several sections of the Clean Air Act.

“They haven’t released their science,” Conway says. “They haven’t done a cost-benefit analysis, which the MATS case that we just won at the Supreme Court, tells us they have to do.”

COURT CASE
In June, the U.S. Supreme Court struck down the EPA’s Mercury and Air Toxics (MATS) regulation, ruling that the EPA had not taken the costs to utility companies into consideration when it formulated the rule.

Because electric utilities need to make long-term decisions based on the best available information, the invalidation of the MATS regulation came only after the utilities began taking action to comply with it.

“We had a victory,” Conway says, “but it resulted in about 18 percent of coal-fired generation being retired in trying to comply with a rule that wasn’t legitimate in the first place.”

Bevin says he is prepared to join the attorneys general and governors in 26 other states refusing to submit state implementation plans.

“I know you’re concerned about the fact that while they’ve said that if we don’t submit a plan, they’ll submit one for us, and that may be more onerous on some of you, than the alternative,” Bevin acknowledges. “And I appreciate that, and so we’ll have open dialogue about this. We’ll have a conversation about this. But I think it would be a mistake.”

CANDIDATES SPAR
Though Bevin and Conway appear to be in agreement on Kentucky’s next move, the candidates sparred at the debate about each other’s abilities and commitment to deal with the issue. Bevin alleged that Conway has a spotty record on energy issues, citing the Sierra Club’s support for Conway in a prior congressional race.

“Truth is, we’re very different people,” Bevin says. “I will stand on our autonomy. I will stand as somebody who has the authority as a governor to be the last line of defense.”

Bevin warns that rates will increase “catastrophically” without action.

Conway disputed Bevin’s charge that he once favored “cap and trade” legislation to limit carbon emissions and argued that he is better equipped and experienced to handle the challenges ahead.

“I have stood up, I’ve taken on my own party,” Conway says. “I’ve put people over politics, I’ve put Kentucky first. And I am going to do everything I can to stop the Clean Power Plan because I think it hurts Kentucky. I’m going to see this lawsuit through to the end as attorney general and as your next governor. We will not be submitting a plan to the EPA while we do not think that this rule is legitimate. End of story.”

INDEPENDENT CANDIDATE
Independent gubernatorial candidate Drew Curtis was not a part of the KAEC debate, but a statement released on his campaign Web site indicates support for both the Clean Power Plan and Kentucky providing an implementation plan.

“Unless we do provide one, the EPA takes over and there is no recourse later to provide a state plan,” Curtis says in his statement. “As governor I’d prefer to retain control of this program, so we must provide a plan to the EPA for Kentucky to implement the Clean Power Plan.”

ECONOMY
Both Bevin and Conway say the state needs to change its tax structure, including phasing out the inventory tax, yet they differ on the current shape of the rural economy under current Governor Steve Beshear.

“We have got to be serious about why we are being held back,” Bevin says. “We must pass Right to Work legislation. It has to happen. This is no longer an option.”

Bevin also says Beshear’s expansion of Medicaid is unsustainable and comes at a price that taxpayers “cannot bear.”

EDUCATION
Both candidates told the KAEC board that Kentucky’s community and technical schools need to meet the needs of employers.

“If we want certain outcomes, we need to incentivize those outcomes,” Bevin says.

Conway says early childhood education would be a major focus of his administration.

“We have too many kids in rural areas in single-parent families that aren’t getting exposed to the tools they need at the tenderest ages to make certain they learn,” Conway says. “And that’s how you break the cycle of poverty.”

WORKFORCE DEVELOPMENT
Bill Prather, president and CEO of Farmers Rural Electric Cooperative in Glasgow, told the candidates about a lack of available workers in some parts of Kentucky, explaining that people are opting to collect state and federal benefits rather than enter the workforce.

“There should not be a working age, able-bodied childless man or woman in this state receiving benefits from this state,” Bevin says. “Period.”

Conway says Kentucky needs to “re-engineer the way the Workforce Development Cabinet does business,” and to coach high school students to prepare for jobs of the future.

PENSION SYSTEM
Responding to concerns by board member Linda West of Salt River Electric Cooperative, headquartered in Bardstown, the candidates disagree on the best course of action to rescue Kentucky’s imperiled pension systems for retired state workers and teachers.

“It is impossible to maintain as a defined benefit program,” Bevin says. “We’ve got to move to a defined contribution plan for all people who are not currently in the plan.”

Conway countered that Kentucky has largely adopted recommendations by the Pew Foundation to address pension shortfalls.

“It’s going to take a decade and a half of sound budgeting principles to get it out (of debt),” Conway says, adding that he is committed to fully funding future pension obligations in each Kentucky budget, and finding a dedicated stream of revenue to dedicate to pension obligations.

Joe Arnold is KAEC’s Vice President of Strategic Communications. He joins KAEC after 20 years in television news and radio.