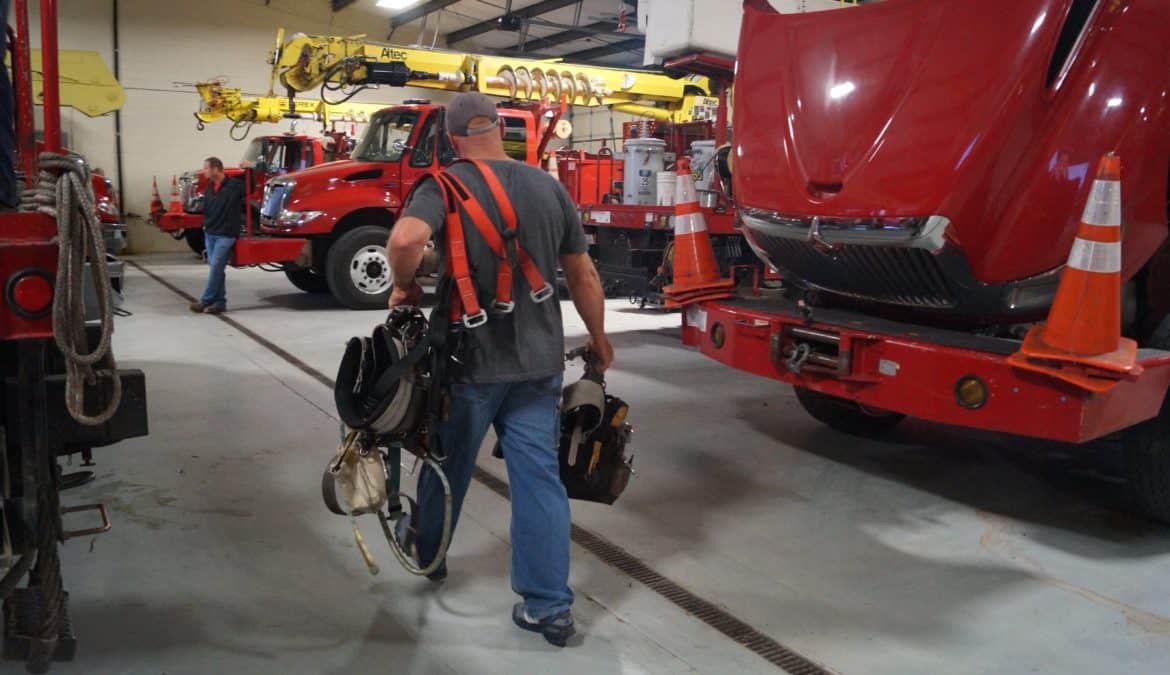 In one of the largest mutual aid deployments in Kentucky history, 131 linemen and other crews from 17 Kentucky electric cooperatives are now deployed to Georgia after hurricane-force winds toppled trees onto power lines, causing numerous power outages. Additional Kentucky co-ops have also volunteered to send crews and are awaiting assignment.

As of 4pm Tuesday, 330,000 electric co-op members in Georgia were without power, down from more than 537,000 when Hurricane Irma’s strong winds and heavy rain toppled trees and power lines on Monday.

“Going into an area with widespread storm damage is one of the most dangerous things you can do as a lineman, but also one of the most rewarding,” said Calvin Larkins, West Kentucky RECC construction manager and a veteran of numerous storm deployments.

WKRECC sent nine people along with two bucket trucks, two digger trucks to set poles, and a couple of pickups towing ATV’s for areas that are hard to reach by truck. Crews already working in Georgia have encountered very challenging conditions.

Through careful coordination with co-op officials in the region, including the Kentucky Association of Electric Cooperatives, the linemen from electric cooperatives across Kentucky are assigned to individual Georgia co-ops who have requested their assistance.

Last year, KAEC coordinated the deployment of 143 linemen for Hurricane Matthew recovery, the most ever. In 2005, 120 Kentucky co-op linemen responded to Hurricanes Katrina and Rita.

The top priority of each local Kentucky co-op is service to its own member-owners. Before committing resources to mutual aid requests, each co-op ensures it has ample crews available for all local needs, including routine maintenance and emergencies.

Two crews (10 Line Technicians) from Pennyrile Electric, based in Hopkinsville, plus a six-man crew from Clark Energy in Winchester are traveling to Vienna, Georgia to assist Middle Georgia EMC, a cooperative serving over 8,000 members within a six county service area.

“As a cooperative that has requested help after natural disasters in previous years, we are glad to be able to provide assistance to the people affected by the devastation of Hurricane Irma,” said Pennyrile Electric President & CEO, Greg Grissom. “As we continue to keep the victims of both hurricanes, Harvey and Irma, in our thoughts and prayers, our focus is to assist with power restoration with safety our top priority.”

Crews from three electric cooperatives departed Kentucky on Tuesday, bound for Oconee EMC which serves 8,000 co-op members in central Georgia. Grayson RECC, Licking Valley RECC, based in West Liberty, and Farmers RECC, based in Glasgow all sent crews to Oconee.

West Kentucky RECC crews in Mayfield and crews from Cumberland Valley Electric, based in Gray also left Kentucky on Tuesday to assist Planters EMC members in a seven-county territory in southeastern Georgia.

“Serving our own members is always our first priority, but as a cooperative, we are strongly committed to helping others,” said David Smart, West Kentucky Rural Electric President & CEO. “Please keep the families affected by this storm in your thoughts and prayers along with the first responders and the thousands of linemen who are going in to help restore power.”
Bluegrass Energy in Nicholasville is sending eight linemen, two crews of four, to Central Georgia Electric Membership Corporation. Three crews from Kenergy Corporation, based in Owensboro, are also assisting Central Georgia EMC, which serves 54,000 billed accounts in 14 counties.

Jackson Energy in McKee, Kentucky has deployed 13 employees to Georgia to assist in power restoration after Hurricane Irma. 12 linemen and a mechanic are helping Coweta-Fayette EMC.

Three crews each from Owen Electric and South Kentucky RECC are assisting Coastal Electric Cooperative which serves roughly 573 square miles with 1,491 miles of line in three counties on the Atlantic Coast.

After initially helping Carroll EMC, west of Atlanta, crews from both Jackson Purchase Energy, based in Paducah and Meade County RECC are now helping restore power to Snapping Shoals EMC, which serves 95,000 members in an eight-county area southeast of Atlanta.

Three crews from Nolin Rural Electric Cooperative, based in Elizabethtown, are deployed to Excelsior EMC, which serves eight counties in southeast Georgia.

Every co-op has an emergency plan, and part of that planning includes what is both a unique and an effective approach to emergency management and disaster recovery: mutual assistance. When disaster strikes, co-ops quickly deploy support staff and equipment to emergency and recovery zones to help sister co-ops restore power.
Because the national network of transmission and distribution infrastructure owned by electric cooperatives has been built to federal standards, line crews from any co-op in America can arrive on the scene ready to provide emergency support, secure in their knowledge of the system’s engineering.

“We ask all of Kentucky to pray for the safety of these dedicated co-op employees and the people they are going to serve,” said Chris Perry, president and CEO of Kentucky Association of Electric Cooperatives. “Our co-op model serves us well all year long, and especially when our brothers and sisters need help.”