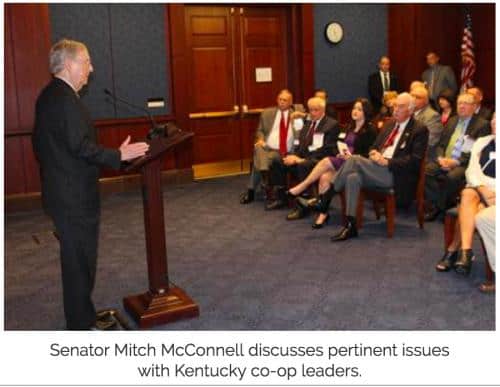 Encouraged to ride the strength of rural America’s voting clout, leaders from Kentucky’s electrical cooperatives descended on Capitol Hill in late April, making sure that Congress is aware of issues which affect the delivery of safe, reliable and affordable electricity.

“Our congressional delegation knows our concerns and is generally very responsive to them,” said Chris Perry, president of the Kentucky Association of Electric Cooperatives. “It’s our responsibility to keep them informed of how policy has a direct impact on our members at the end of the line.”

Perry led the Kentucky contingent who met with every member of Kentucky’s congressional delegation or their staff members.

“It speaks to the importance of electric cooperatives that our elected leaders took the time to meet with us in the middle of a very busy and consequential week in Washington,” said Mike Williams, president and CEO of Bluegrass Energy. Williams also serves on the NRECA Board of Directors.

Even as Senate Majority Leader Mitch McConnell was dealing with high level talks on the nation’s budget and tensions with North Korea, Kentucky’s senior senator made a special trip to a Capitol Visitor’s Center meeting room to address Kentucky’s electric cooperatives.

McConnell’s energy advisor, Neil Chatterjee, briefed co-op leaders on emerging energy policy. Chatterjee is said to be under consideration for a nomination to the Federal Energy Regulatory Commission.

“We’re not in a defensive posture. We have a chance to pursue things that are good for us,” said Jim Matheson, CEO of the National Rural Electric Cooperative Association. “I ask you to redouble your efforts to make a difference in the quality of life for your members.”

Matheson addressed a standing room only crowd of more than 2,100 co-op managers, directors and staffers—the biggest turnout in years— at the NRECA’s 44th annual Legislative Conference.

“In a time of uncertainty, it’s all the more important for us to remain at the table, be active participants in the policy environment and assert ourselves as the voice of American consumers,” he said.

Kentucky leaders also made a national splash when the Environmental Protection Agency posted photos on social media of a meeting between newly appointed EPA Administrator Scott Pruitt and co-op leaders from Kentucky.