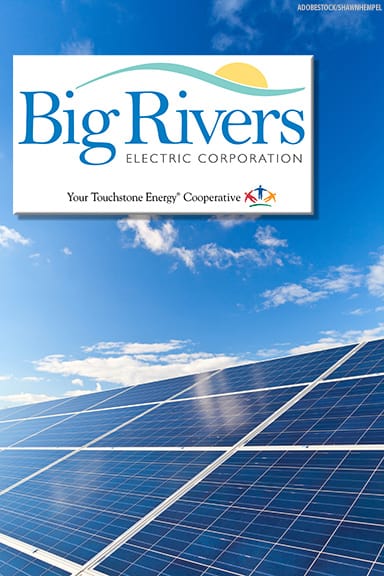 In its application to the PSC, Big Rivers said the facilities would be used to test how well solar power can be integrated into the utility’s grid and also would serve to educate the public about solar energy.

The PSC, in an order issued today, found that building and operating the solar facilities would have no adverse impact on the operations or financial condition of Big Rivers. The PSC noted that Big Rivers is responding to requests from customers that the utility develop solar power programs.

The seven solar facilities, with an aggregate output of 120 kilowatts (kW), will be located at schools, parks or other public facilities, where they will be readily visible. The seven sites, with their generating capacity and cooperative, are:

The total cost of the facilities is estimated at $500,000. Big Rivers said it will pay for the facilities out of its cash reserves and hopes to recoup $125,000 of the cost through a grant from the U.S. Department of Agriculture’s Rural Energy for America Program.

Big Rivers said that, should it not receive the grant, it will reevaluate whether to go ahead with the project.
Annual operating cost of the solar arrays was estimated by Big Rivers to be a total of not more than $4,000. Each of the member cooperatives will be billed for the power produced by the arrays within its service territory and may then provide the electricity to its retail customers subject to the cooperative’ s rates and terms of service .
The order and other records in the case are available on the PSC website, psc.ky.gov. The case number is 2016- 00409.
The PSC is an independent agency attached for administrative purposes to the Energy and Environment Cabinet. It regulates more than 1,500 gas, water, sewer, electric and telecommunication utilities operating in Kentucky and has approximately 75 employees.