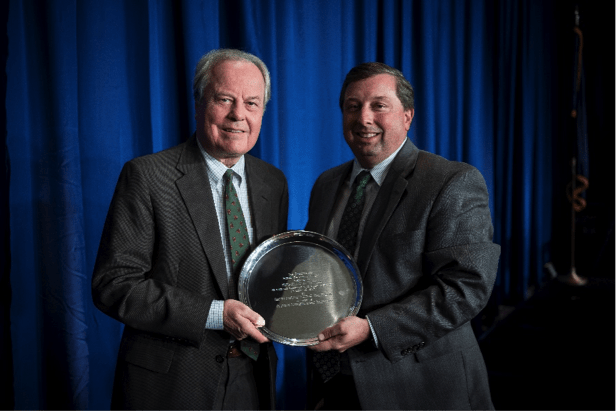 Congressman Ed Whitfield, who represented Kentucky’s First Congressional District in the U.S. House of Representatives for nearly 22 years, has been honored as the 2016 “Distinguished Rural Kentuckian” by the Kentucky Association of Electric Cooperatives (KAEC).

Whitfield received the award at KAEC’s annual meeting on Monday, November 14, in Louisville. He is the 33rd recipient. Previous Distinguished Rural Kentuckians include elected leaders, authors, journalists, business executives, physicians, and sports champions. The award recognizes outstanding individuals who have devoted their lives to Kentucky in a way that matches the co-op mission of enhancing the quality of life here.

“When you reflect on people from Kentucky who’ve received it in the past, and they’re all sort of well-known and accomplished so much, it’s kind of a humbling experience and one that I was surprised at and grateful for, but also unexpected,” Whitfield said.

“Ed Whitfield is a true friend of Kentucky and of Kentucky’s electric cooperatives,” said Chris Perry, president and CEO of KAEC.  “His understanding of and prioritizing the needs of rural Americans regardless of party politics are an example for all elected leaders.”

A native of Hopkinsville, Kentucky, Whitfield was elected to Congress in 1994, serving until his retirement in September, 2016. The Republican’s 11 terms in the House were highlighted by his chairmanships of the Oversight and Investigation Subcommittee, and the Energy and Power Subcommittee.

“He held the reins,” said U.S. Rep. Fred Upton (Mich), the chairman of the House Energy and Commerce Committee.  “We trusted him to push through a whole number of different pieces of legislation.”

“He became a great advocate for the electric co-op community because he understood the importance of the electric co-ops to his own constituents,” said Jim Matheson, president of the National Rural Electric Cooperative Association (NRECA) and a former fellow congressman. “It’s a great example of how our grassroots network works across the country.”

As Chair of the Energy and Power Subcommittee, Whitfield led oversight efforts of what he characterized as “an overly aggressive executive branch,” working to balance the need of cleaner energy with the need of protecting American jobs and keeping the United States competitive in the global marketplace.

Grissom points to Whitfield bucking his own party leaders to oppose energy deregulation in the 1990’s.

“It threatened our existence, it threatened our grassroots fundamental values,” Grissom explained.  “And, Congressman Whitfield recognized that early on and was an ally from start to finish.”

Working with other members of Congress, Whitfield’s legislative accomplishments include designating the Land Between the Lakes as a National Forest, establishing a workers compensation program for workers at both Paducah’s Gaseous Diffusion Plant and the Department of Energy nationally, a prescription drug monitoring system, the first Medicare Prescription Drug benefit plan for seniors, and introducing the first bill to pass the House to abolish the slaughter of horses in America.

“He worked with us greatly on our Fort Campbell relationship,” said Eston Glover, former Pennyrile Electric President.  “We were in limbo about losing a large part of the base, a part of the soldiers on base, and we had a strong battle to keep that base alive and keep it intact. He was a strong force and he was in a position that he could be a strong force.”

“I’d like to thank the constituents of the First District of Kentucky for giving me the opportunity to represent them in the U.S. Congress. It’s been a great honor,” Whitfield said.  “You can’t represent people without being involved in their day to day struggles with the issues that they deal with, and I don’t think anybody can serve in public life without becoming a little bit more sensitive to the needs of the people.  So, I want to thank them for their support, their dedication and their commitment and for allowing me to represent them.”

Whitfield’s wife, Connie, was formerly a director of the Export-Import Bank, Assistant Secretary of Interior for Fish, Wildlife and National Parks, and Justice Department attorney.

“Connie worked very hard with me throughout the whole time,” Whitfield said.  “She has been instrumental and very much involved.”

A graduate of the University of Kentucky and UK Law School, Whitfield was practicing law in when he was elected to one term in the Kentucky House of Representatives in 1973.  He also headed his family’s oil distributorship in Hopkinsville, and served as counsel to the president of Seaboard System Railroad and later as a lobbyist to CSX.  He was working as an attorney adviser to the Chairman of the Interstate Commerce Commission when he decided to run for Congress in 1994.

“The first day I encountered him, the first time we had a conversation, from that point until he retired from Congress, Congressman Whitfield, Ed Whitfield is the same person,” said Michael Pape, Whitfield’s long time District Director. “In his values, in his persona.  People sometimes say ‘Don’t get into politics because it will change you, you won’t be the same person once you come out.’ The one thing I’ve noticed about Ed Whitfield is that he’s the same person, with more wisdom now, but the same person, the same values, the same type of person that said ‘I can make a difference’ when he went into office and when he came out of office.”