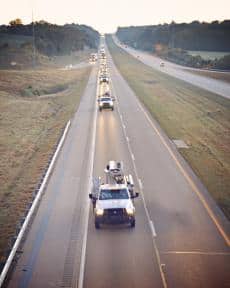 Linemen from Kentucky’s Electric Cooperatives are heading south to assist with damage inflicted by Hurricane Matthew.   Following requests sent ahead of the storm by co-ops in Florida and South Carolina, nine Kentucky electric co-ops are sending workers to provide manpower and assistance for an area of the country that is expected to be hit by the hurricane today.

Over 80 co-op linemen left Friday morning, travelling toward South Carolina and the area between Gainesville and Jacksonville, Florida as part of a staging effort by co-ops there.  Prior to a storm, affected co-ops will often ask for out-of-state crews to travel to the area.  Workers are then on call depending on the severity of the destruction and path of the storm.

“KAEC meets several times a year with other states across the south – including Florida and South Carolina – to get together the contingency plans and action plans that we are exercising now,” said Robert Thornton, a member of KAEC’s Safety and Loss Prevention Team. “Georgia has not pre-staged crews at this time, but if something happens on that coast, other Kentucky crews could potentially be dispatched as well.”

The Kentucky crews are working with co-ops further inland than some of the areas already experiencing severe storms on the coast.  Clay Electric Co-op in Florida and Berkley Electric Co-op in South Carolina are likely to receive the bulk of Kentucky workers.