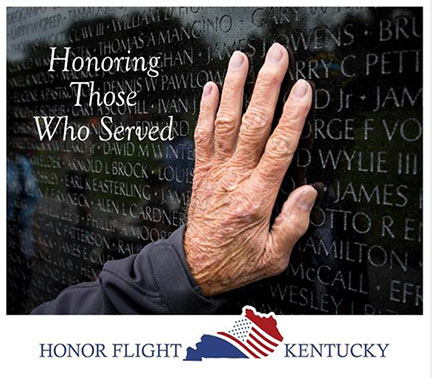 Kentucky’s Touchstone Energy Cooperatives are sponsoring 43 World War II, Korean and Vietnam war veterans who will travel from Lexington to Washington, D.C., on Saturday, Aug. 27, as part of this year’s Honor Flight—a one-day tour of war memorials erected in their honor in the nation’s capital.

This is the sixth year Kentucky’s Touchstone Energy Cooperatives are sponsoring an Honor Flight, but it is the first year of partnering with Winchester-based Honor Flight Kentucky, which was founded in December 2015.

Veterans on this year’s flight will include:

• David Settles, 92, of Versailles who served in the Army during World War II, Korea and Vietnam. On one day alone in World War II he was shot eight times and drove the lead vehicle during the Allied advance through the Ruhr Valley. He then boarded a ship toward Japan and was in the Pacific when the atomic bomb ended the war. He was awarded 16 medals and retired a full colonel.

• David Downey, 90, of Paris who served in the Navy during World War II, Korea and Vietnam. As an African American, he battled discrimination while serving in Pearl Harbor. After World War II, he rejoined the Navy in 1949, served in Korea and in Vietnam with later famous quarterback Roger Staubach. Staubach at that time was in charge of supplies at the Da Nang dock, and he signed the papers that sent Downey home two months early.

• Ken Powell, 96, of Lexington who served in the Army during World War II. He left Boston Harbor in February 1944 and eventually saw action after landing on Omaha Beach in Normandy. He earned five medals for heroic actions.

• Francis Nello, 92, of Garrett who served in the Pacific for the Navy during World War II and who saw the famous raising of the flag by the Marines atop Iwo Jima’s Mount Suribachi. He also fought at Okinawa and earned medals recognizing his military service.

The veterans will fly from Lexington’s Blue Grass Airport to Reagan National Airport in Washington, D.C., where they will board two buses for a full day of honors and sightseeing. They will visit the World War II and Korean War memorials on the National Mall. The group will also tour memorials dedicated to those who served in the Air Force and Marine Corps in Arlington, Va.

The day will culminate with viewing the changing of the guard ceremony at the Tomb of the Unknown Soldier in Arlington National Cemetery. Honor Flight representatives will participate in a wreath-laying service at the tomb. Volunteers representing (Co-op) and the other co-ops will accompany the vets as guardians, to ease their travel and, if needed, push their wheelchairs.

To further honor this year’s Honor Flight participants, (Co-op) is helping to organize a special welcome for their return. Families, friends and supporters are invited to arrive at Blue Grass Airport by 9 p.m. on Aug. 27 to greet the veterans when their flight arrives from Washington. There will be additional parking available at the airport to accommodate the crowd.

The Honor Flight sponsored by Kentucky’s Touchstone Energy Cooperatives is part of a larger national network that has 127 chapters in 41 states. The inaugural Honor Flight took place in May 2005, when six small planes flew out of Springfield, Ohio, taking 12 veterans. Since the 2005 inception nearly 180,000 veterans have participated in the program.