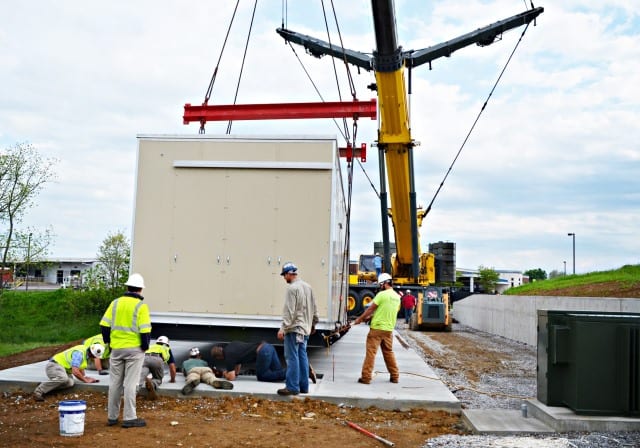 If there’s natural gas right outside your front door, why not use it to generate electricity? That’s exactly what one Kentucky electric cooperative is planning to do.

“Given the availability of a natural gas pipeline directly in front of our headquarters and the affordability of the fuel, it just makes sense to take advantage of the opportunity,” said Mark Stallons, president and CEO of Owen Electric Cooperative

On May 17, workers moved a 1,988-kilowatt generator into place. When it starts operating in June, it’s expected to provide supplemental power for the co-op’s nearly 60,000 members.

The project cost $2.6 million, but savings are expected to exceed $9 million over 20 years. It will also provide a revenue stream for the city of Owenton’s general fund.

“The city of Owenton receives 3 percent of the gross gas billing,” said Frank Downing, chairman of the Owen County Industrial Authority. “Any connection to the system from the gas line’s origin in Gallatin County improves the economic condition for the city of Owenton through its charge for gas sales.”

its power supplier, the co-op is allowed to supplement a portion of its load with power from sources other than those provided by the Winchester-based G&T.

“There is an interest among our 16 distribution co-op members in seeking alternative forms of generation,” said Nick Comer, East Kentucky Power’s external affairs manager. “A clause in our standard agreement gives them the flexibility to utilize local resources, including renewable or fossil fuel generation.”