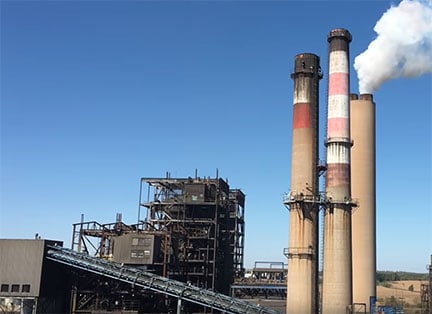 Deputy Secretary Rocky Comito of the Kentucky Labor Cabinet today joined employees and officials in Robards to present the employees of Big Rivers Sebree Station with the Governor’s Safety and Health Award. The honor recognizes the employees for working 2,063,993 hours without a lost-time accident or illness. This is the facility’s 11th award, last earning the recognition in August 2014, when it had more than 1.5 million hours without an incident.

“To go two million hours without a lost-time incident shows an extreme dedication to safety,” said Labor Secretary Larry L. Roberts. “The Big Rivers Sebree Station continues to maintain an incredible focus on staying safe on the job, which is something every workplace in Kentucky should have as a goal.”

Incorporated in 1961, Big Rivers has earned 38 previous Governor’s Safety and Health Awards throughout the years. The corporation is a member-owned, not-for-profit, generation and transmission cooperative headquartered in Henderson. With nearly 530 employees, Big Rivers owns, operates and maintains a 1,285-mile transmission system, three generating plants and 22 substations.

“Safety builds the foundation for everything we do at Big Rivers,” said Bob Berry, president and CEO at Big Rivers. “Reaching two million hours without a lost-time incident at Sebree Station is a tremendous accomplishment, and once again highlights our commitment to make this a safe workplace. I want to congratulate IBEW’s leadership for continuing to promote our safety culture and each employee for doing his or her part to ensure health and wellness. It’s encouraging to see their teamwork and dedication recognized by the Commonwealth’s highest safety honor.”

The International Brotherhood of Electrical Workers (IBEW) Local 1701 represents the employees at Sebree Station. The national IBEW union traces its roots to the late 1800s, and is the oldest and largest electrical union in the world.

“I am so proud of our dedicated workforce in achieving the two million-hour milestone,” said Mike Pullen, vice president of production. “This award is earned by a continuous daily focus on safe work practices in our plants.”

The Kentucky Labor Cabinet presents the Governor’s Safety and Health Award in recognition of outstanding safety and health performance. An establishment may qualify for the award if its employees together achieve a required number of hours worked without experiencing a lost-time injury or illness. The required number of hours is dependent upon the number of employees. In the case of Sebree Station, the requirement is 500,000.

The Governor’s Safety and Health Award program is part of Gov. Steve Beshear’s efforts to improve the health of all Kentuckians. The Governor launched kyhealthnow last year as an aggressive and wide-ranging initiative to reduce incidents and deaths from Kentucky’s dismal health rankings and habits. It builds on Kentucky’s successful implementation of health care reform and uses multiple strategies over the next several years to improve the state’s collective health.

Every establishment within the geographical boundaries of Kentucky is eligible for the award, even if the establishment won the award the previous year. Eligibility is limited to one award during a 12-month period of time.

For more on the Governor’s Safety and Health Award, and for a list of past winners, click here.

-a press release from the Kentucky Labor Cabinet