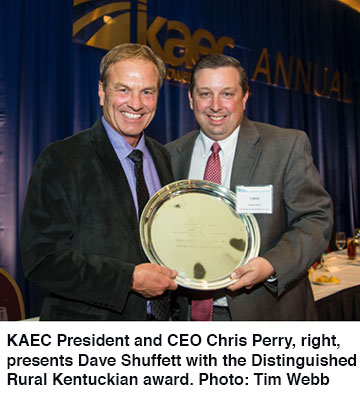 Dave Shuffett, the longtime Kentucky broadcaster, columnist, and outdoors enthusiast, has been honored as the 2015 “Distinguished Rural Kentuckian” by the Kentucky Association of Electric Cooperatives (KAEC).

Shuffett received the award at KAEC’s annual meeting on Monday, November 16, in Louisville. He is the 32nd recipient. Previous Distinguished Rural Kentuckians include elected leaders, authors, journalists, business executives, physicians, and sports champions. The award recognizes an outstanding individual who has devoted their life to Kentucky in a way that matches the co-op mission of enhancing the quality of life here.

“Dave Shuffett could be called Mr. Kentucky,” said Chris Perry, president and CEO of KAEC. “His commitment to our state, its culture, and its people resonates with our cooperative family and mission.”

A native of Greensburg, Kentucky, Shuffett’s television career has spanned more than three decades, including about 20 years on Kentucky Educational Television, first as host of Kentucky Afield and later as host of Kentucky Life, from which he retired in 2014. Shuffett is a writer for Kentucky Living magazine’s Great Outdoors columnist.

“I think Dave is first and foremost a Kentuckian,” said Virginia Fox, former KET executive director and CEO. “Dave captures a lot of the essence of what it means to be a Kentuckian. And that was one of his special skills, a talent, finding and evoking those qualities that define Kentucky and its land and people. If you lined up 10 people and were looking for a Kentuckian, I think Dave would be the first pick.”

“Dave’s contribution to the woods and water and art, culture, and history in this great state is unmatched,” said Claude Bacon, a longtime friend. “His keen delivery has allowed Kentuckians to walk in his footsteps and experience the great things about our state. And for that alone he’s deserving of this honor.”

Shuffett has two children, Miranda and Will, and two stepchildren, Maddie and Austin. He and his wife, Dr. Sandra Shuffett, live on a Jessamine County farm.

The Distinguished Rural Kentuckian video tribute can be viewed on KAEC’s YouTube Channel: