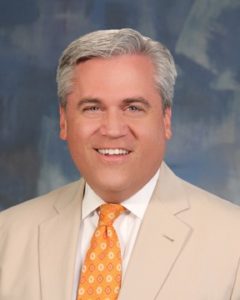 Joe Arnold, political editor, reporter, anchor, and host of the weekly The Powers That Be program for WHAS11, has been named Vice President of Strategic Communications for Kentucky Association of Electric Cooperatives.

KAEC President and CEO Chris Perry says, “Our industry is facing many challenges due to the Clean Power Plan and other regulations. Joe is a communications leader with the skills to effectively communicate how issues will affect Kentucky’s electric co-ops and our members. This is a critical role in the success of our organization and during a period of transition in the utility world. We are looking forward to having Joe on board.”

Arnold announced his departure from television news to colleagues in the WHAS11 newsroom Tuesday morning, August 4, 2015. Though Arnold will begin his position at KAEC on September 18, he will continue to contribute to WHAS11 political coverage as host of The Powers That Be and on election night.

“It is with mixed emotions that I announce my decision to transition to the next stage of my career,” Arnold said. “WHAS11 is a leader in broadcast journalism and my dear and talented colleagues have been a second family to me over the last 17 years. WHAS11 has introduced me to leaders, concerned citizens and issues in Kentucky, and I am excited to be able to apply my experience and skills to an organization that supports a critical asset for our state, reliable electricity at affordable rates.”

In his new role, Arnold will oversee corporate media relations communications for KAEC, which includes Kentucky Living magazine. He will represent KAEC on local and state legislative concerns and lead KAEC communications as it relates to the 26 electric cooperatives and other key constituent groups.

Recognized locally and nationally for his reporting of politics and government, Arnold first joined WHAS11 in 1998 while host of The Joe Arnold Show on WHAS-AM 840. Beginning in 2001, Joe anchored Good Morning Kentuckiana and weekend newscasts before assuming the role of political editor in 2009.

Arnold’s reporting has been recognized with top awards from the Associated Press and Emmy Awards for investigations and blogging.

A 2012 graduate of Leadership Louisville, a civic training group for emerging leaders, Arnold has also been recognized for his contributions to charitable causes, including the Colon Cancer Prevention Project and the Alzheimer’s Association.

Arnold lives in Louisville with his wife and two children.